Ian posted on the Blog after a visit to the Nant y Bai mine near Rhandirmwyn a few weeks ago.  I visited with Bea and Johnny today and - along with searching for magic crystals - noted a few moths.  Most abundant was the heather-feeding Tortricid Ancylis unguicella (photo), which has only 5 previous Carms records but is under-recorded as an early(ish) season species of heathland: 50+ were seen and in some places they flew up with almost every footstep. 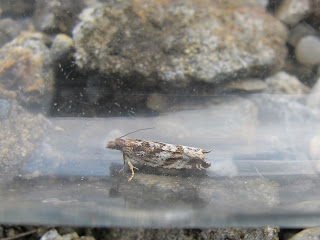 Otherwise things were pretty quiet, with 10+ Cydia ulicetana, 4 Common Heath, 2 Crambus lathoniellus, 1 Common Carpet and 1 Micropterix aureatella (the 32nd Carms record but surprisingly only the 2nd from the eminently suitable north-east of the county).  A case of Coleophora serratella (photo) on Birch was the only identifiable larva because all of the abundant Eriocrania mines were vacated (see yesterday's post on this genus). 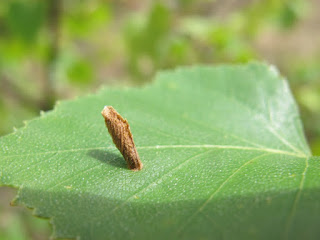