I am trapping once or twice a week but numbers and species have been low. I last trapped on Thursday night achieving 20 species (35 moths), all typical and mainly common species for this time of year, with several FFY,  including Scorched Wing, one of my favourites. On Friday, walking through our hay meadows, I saw the Cuckoo on the electricity wire and there were micro moths in virtually every flower (Buttercup, Red Campion, Silverweed and Stitchwort). There must have been thousands of them. See photo. 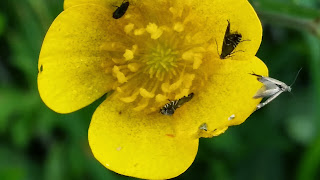 I think these are Cocksfoot Moth; Glyphipterix simpliciella? Not sure what the rather odd individual is on the right? In a different field the buttercups were full of Micropterix calthella but there were fewer of these.  Walking through these fields I disturbed several Small Heath butterflies, Grass Rivulets and Carpets (Garden, Silver Ground and Common).  I found a Green Carpet at rest on a tree trunk in the hedge and a Common Wave on a hazel leaf.

Spurred on by Ian's recent entry I went on down into the woods to check a small bilberry patch. I found 2 Micropterix aureatella. 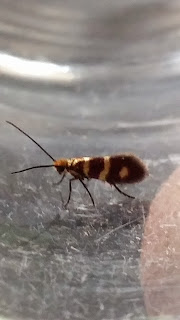 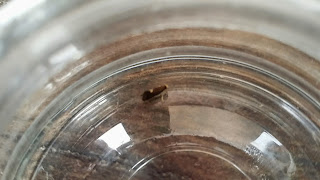 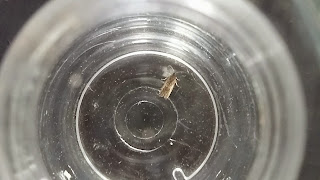 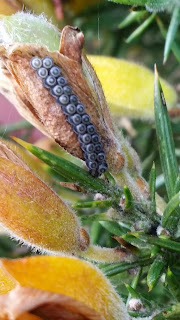 Flying around a patch of gorse in our rhos pasture were the other two micros pictured. Is the one Psychoides fillicivora but I have no idea regarding the other?

The eggs on the gorse I think are from the Buff-tip?

Yesterday I saw a Small Yellow Underwing feeding at a chickweed flower in our scrapes' meadow, exactly a year since I saw the last one and in the same field.  On the way back I saw a slow worm poking out from some rubber sheeting.