I went out this afternoon to check whether Micropterix aureatella occurs in local woodland, where bilberry dominates the ground layer, checking steep slopes with this plant at Troserch Woods (N of Llangennech) and Cwm Mawr (the NW `arm` of Stradey Woods). The moth was found at both localities, seen only sparingly, but caught in better numbers by sweeping. 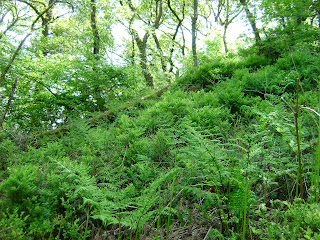 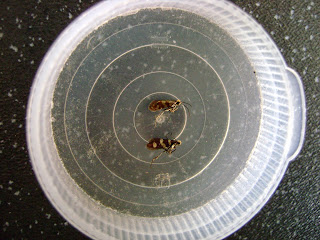 Above: a `comparison photo` showing Micropterix tunbergella on top (caught recently at Pwll) and M. aureatella from Cwm Mawr. Click on pic to enlarge.

I also caught a Nematopogon sp. (to be looked at later) and saw a few `tent nests` of the bilberry pug, formed by spinning terminal bilberry leaves together. Some passed on to Barry Stewart about ten or more years ago were reared to adult moths.
After traipsing up and down the steep bilberry slopes (which were steeper than in the photo above - Sam may recall how steep the Troserch slopes were from a bryophyte survey he carried out there), I felt like going somewhere easier ie flat!
I went to that part of the Llanelli Millennium Coastal Park that is located between Burry Port and Pwll, but the strong, gusty wind made sweeping and beating difficult, though I did flush a dingy shell. Seeking shelter from the wind, I examined the various tree plantings and `homed in` on some areas with aspen.
I noted a few folded leaves, perhaps larval retreats for small chocolate-tip possibly? I seek the opinion of George here, given his experience with this moth near Cross Hands. A photo is given below. 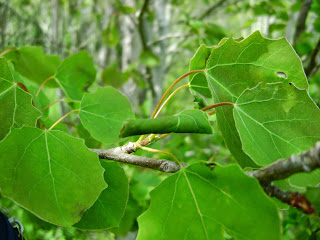 Above: rolled leaves of aspen.

The best find, however, was a solitary Adela croesella, sheltering on an aspen leaf. Sam`s 2013 Carmarthenshire list notes only one record (from Pembrey perhaps?). A photo is shown below. 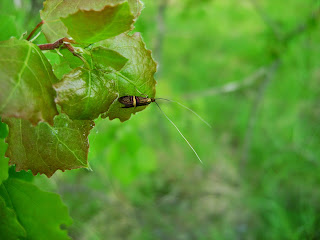