I`ve been looking for (searching, sweeping), and carefully checking Micropterix during the last couple of days but, sadly, nearly all have been M. calthella. However, after this afternoon`s visits to several sites (and much tiring `leg-work`), I had a visitor, resting on my back-door (not the normally more productive front door!) - M. tunbergella, with its lovely metallic purple and gold wings. Sometimes it pays not to try, perhaps!
I tried too, to see if any marsh fritillaries were present at a nice rhos pasture site near Five Roads, Llanelli. None were seen, but I will return in a week or so - though I`m not too hopeful, as though the vegetation looks suitable, it is rather tightly-grazed.
What I did find was another much declined and very scarce species associated with rhos pastures - the hoverfly Microdon myrmicae (it used to be mutabilis), a fascinating species that develops in nests of the ant Myrmica scabrinodis. In fact it is probably rarer than the iconic marsh fritillary, though presumably it is not searched for by most lepidopterists. Mine was flying over a wet area with much heath lousewort Pedicularis sylvatica. The specimen shown below will be returned to the site where it was caught tomorrow morning. 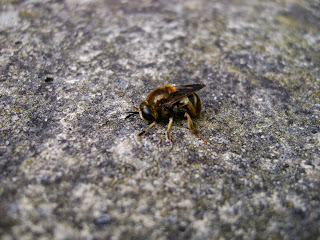 Above: click on the pic to enlarge - look at the distinctive antennae.

I`ve put out a couple of moth traps in the garden tonight, as striped hawk-moths have been turning up in southern England. I may be lucky (or probably not!).
Posted by Ian Morgan