As the weather seemed suitable, I had five actinic traps out last night (one at home, one at Furnace Quarry and three at Stradey Woods) and it was a disappointing result for the effort. It certainly was n`t moth-less, but the cast comprised only the seasonal regulars with a total of just c.22 spp. collectively at the three Stradey Woods traps, and with a distinct lack of micros (which I was hoping to catch). Indeed, only one individual micro was caught and that escaped from the trap as I was about to pot it...it `looked` different, but I`ll never know what it was! Several common FFYs were caught. My home trap and that at Furnace Quarry were also rather dull in catch terms. 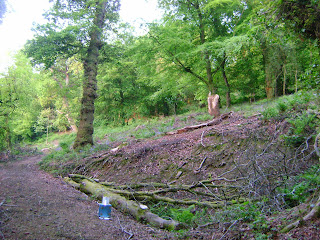 Above: one of the Stradey Woods trap sites at dawn - plenty of potential. 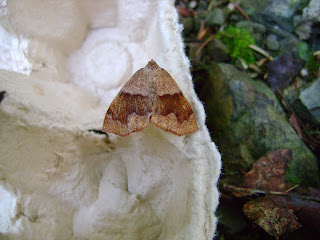 Above: barred umber, an uncommon species (for me) and probably last night`s best moth.
Posted by Ian Morgan