Following the posts yesterday from Ian and an email from Russel Hobson re the larval food plant of the brown argus, I set out on my walk in the afternoon specifically aiming to try to identify any cranesbills or storksbills on the Ffos Las site.  I had walked less than 100 yards on site when movement on my left caught my eye and I was thrilled to see a brown hare which bounded across an area of long grass and stopped within an area of newly planted trees. 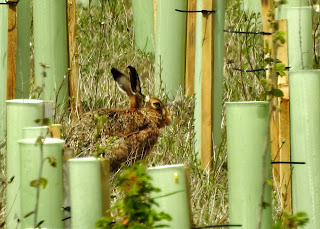 I was busily holding my breath taking photos when a fox came into view. 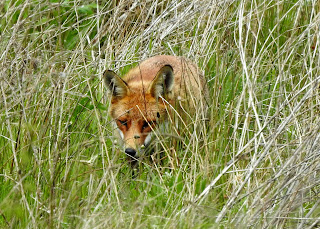 Fortunately the strong wind was blowing my scent away as neither the fox or hare appeared to be aware of my presence or that of my dog.  Luckily too the dog didn't sense them as I have to admit that even though she is good most of the time, instinct to chase would probably be too strong. (She would have no hope of catching; for her the fun is in the chase and she keeps running in a straight line even when the quarry turns off). 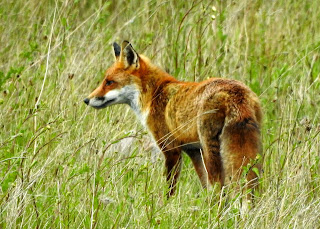 The fox came out into the open away from where the hare was hiding and slipped under the fencing around the solar park. As soon as the fox had gone, the hare shot off in the opposite direction and I continued my walk and hunt for plants - at least they don't run or fly away! 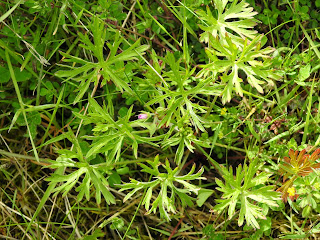 The only cranesbill that I have been able to identify so far is this one which I think is a cut-leaved cranesbill which BCT say has been reported as a larval food plant for the brown argus.  This occurs in several places on Ffos Las and definitely alongside the path where I photographed the brown argus so it may be able to colonise the site.  There may be other cranesbills on site but I'll be more confident of identification when they come in to flower.
﻿
﻿
Posted by Maggie James