How Green was my Granny...

My late grandmother had a tiny urban garden in College Hill that was located close to the town centre of Llanelli, and I`d be intrigued as a child to see the wildlife that passed through or paused to take sustenance from some of the old-fashioned flowers that she cultivated. Obviously, the wildlife would mostly have been the commoner birds and butterflies but, sometimes, I would see something that I could not recognise as a young natural historian.
Last Friday, a new book on urban wildlife in a garden that is literally only a street or two from my grandmother`s was launched, as part of the pre-National Eisteddfod events in Llanelli. Gardd Mewn Tref/A Cottage Garden in Town (Gwasg Gomer, £9.99) demonstrates how the author, Stuart Blackmore, has developed his garden into an attractive wildlife oasis that attracts a variety of lepidoptera and other wildlife. Indeed, Sam actually lists Stuart`s record of a hummingbird hawk-moth, spotted a few days ago on Phlox in his James St garden. If a higher percentage of urban gardeners planted a variety of nectar-rich flowers and other wildlife-friendly plants, then biodiversity would really thrive in our towns.

In another Llanelli garden this afternoon (at Nevill St near the main railway station), I noticed some Pyrausta around a patch of flowering marjoram. The same garden had ( a few weeks ago) a mullein moth munching on a Buddleia leaf and, a couple of years back, a hummingbird hawk-moth was also seen here. 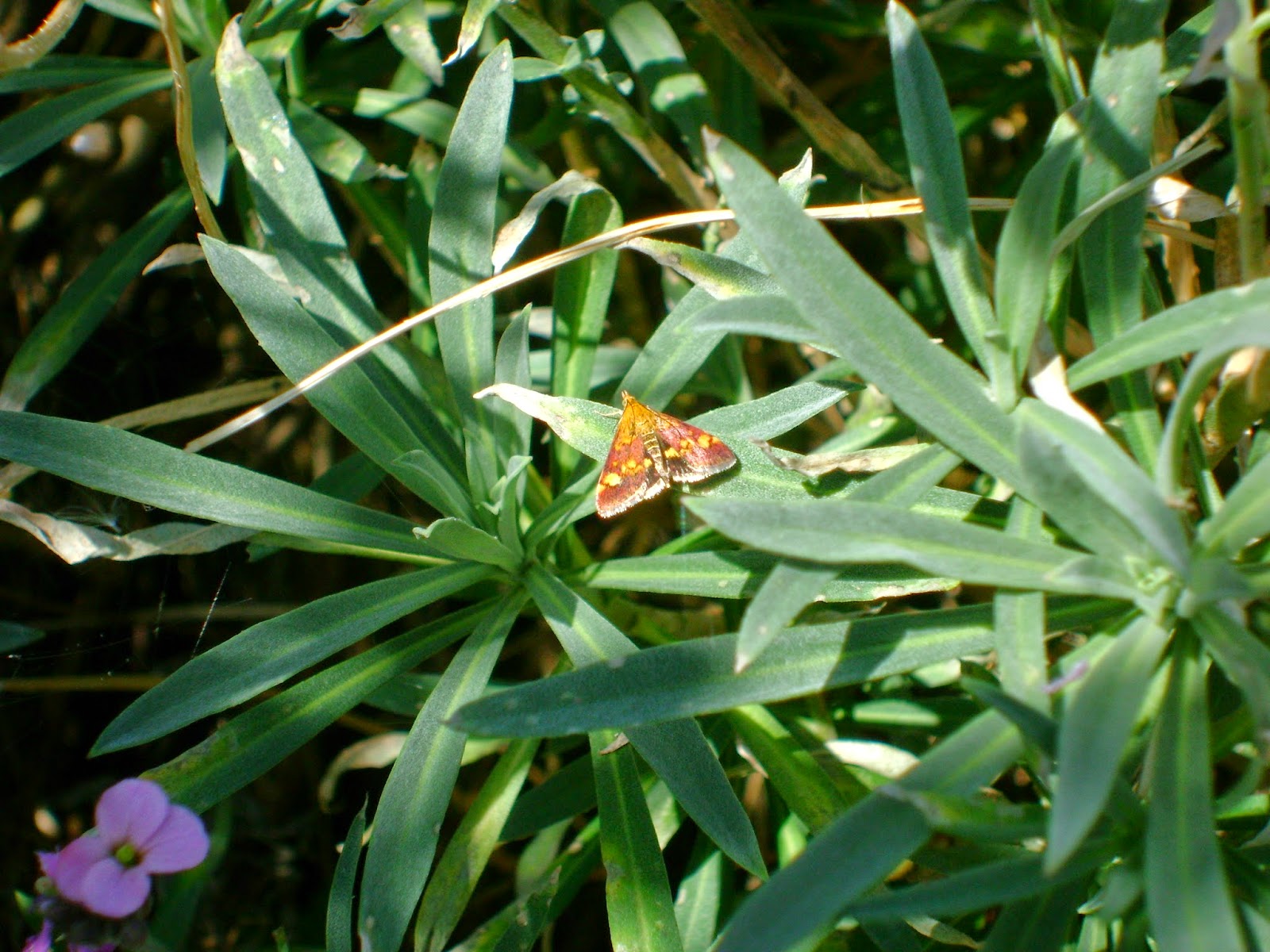 Above: Pyrausta resting on Erysimum `Bowles` Mauve`, which grows next to the marjoram. It looks more like P. purpuralis rather than P aurata to me...is this so?....
....however, reading further, I`m now not so sure and I`ll go back in the next day or two to capture one and look at the underside of the hind-wings.

Reading the latest Carmarthenshire update on hummingbird hawk-moths, I went for a quick look in my garden, but none were to be seen (I must be the only Carmarthenshire moth-er who has n`t had one yet!). Several other butterflies were around though - some small tortoiseshells, a peacock and a good half-dozen gatekeepers. Just as I was walking up the path back to the house, a comma landed on a runner bean leaf and a holly blue came into view. 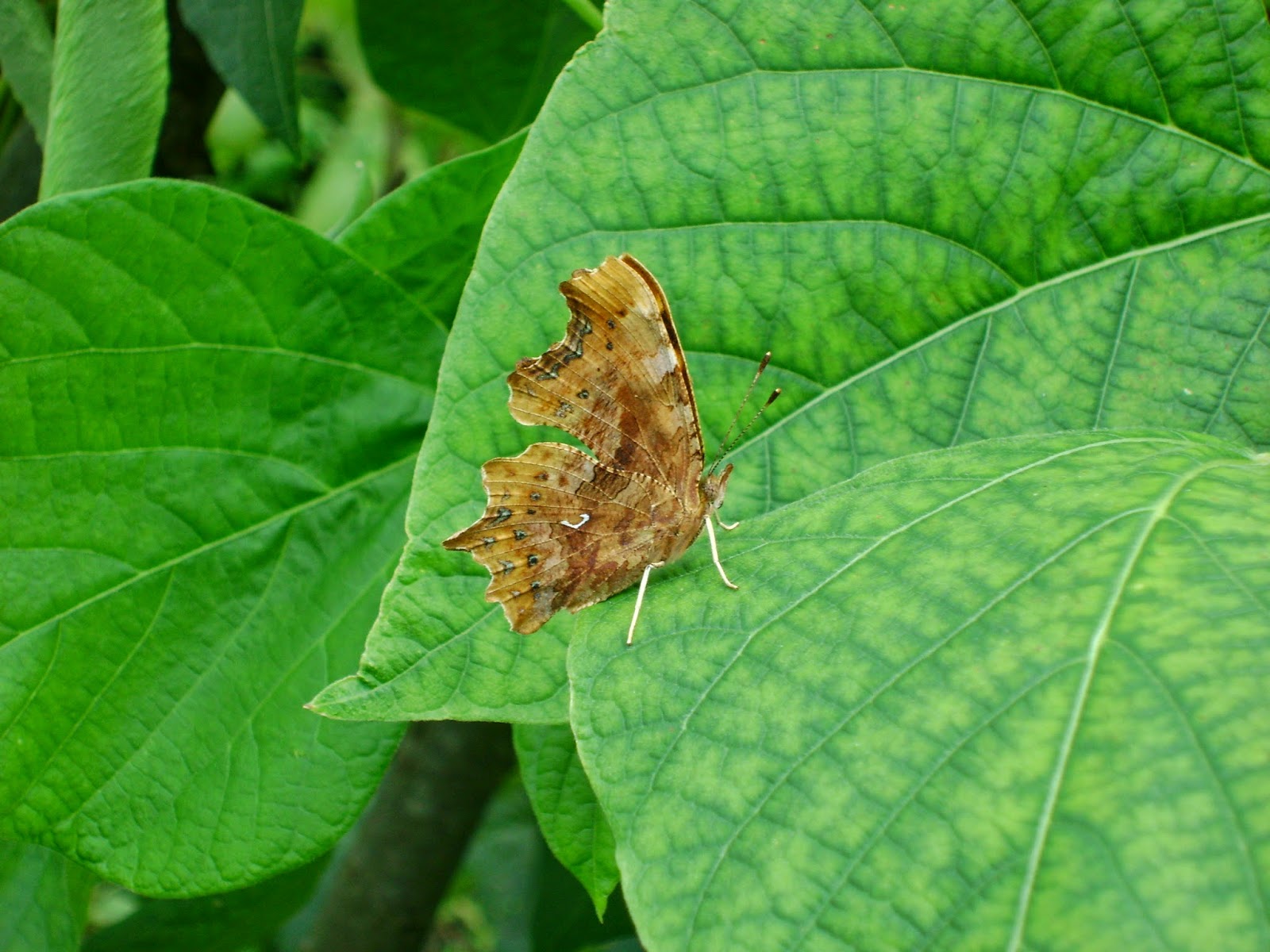 Above: this afternoon`s comma...note the `comma mark` on its underwing. 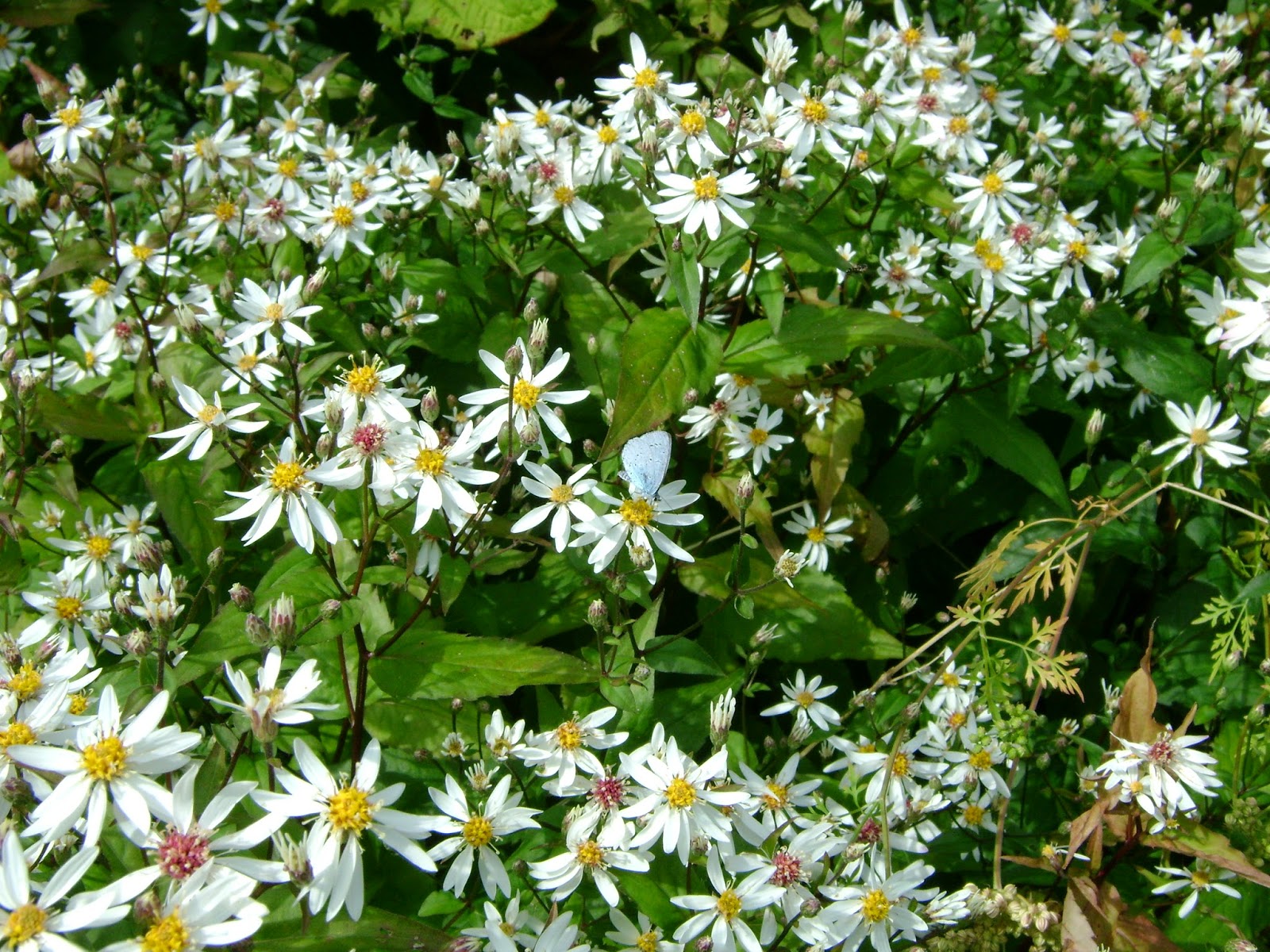 Above: let`s see if you find today`s holly blue among these Asters! (click on photo to enlarge).

Finally, I bet that you don`t know the shrub below! It`s Itea illicifolia (from China) and noctuids are supposed to love to visit its hanging flowers: 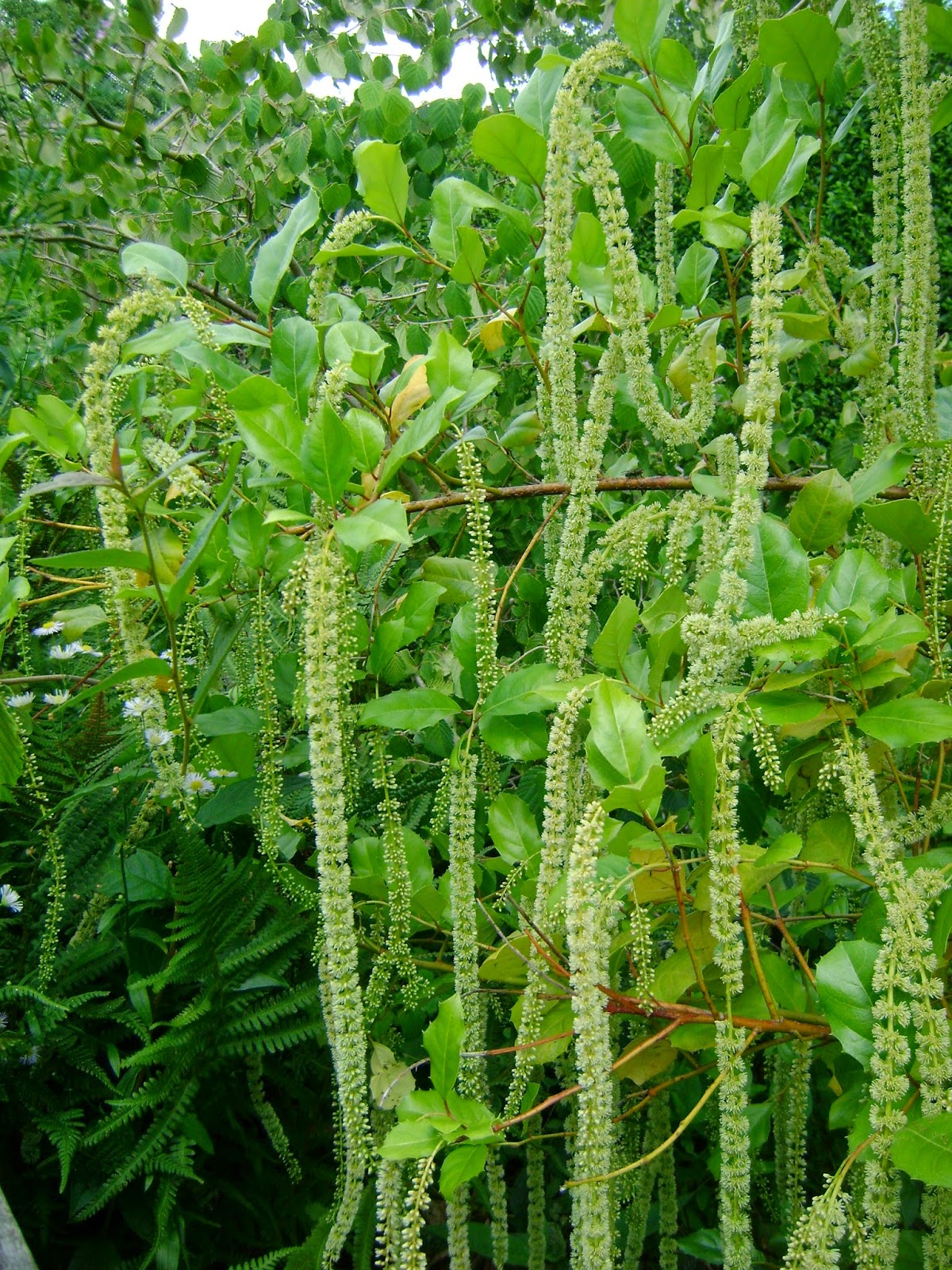 Stop Press!.... Maggie James has just emailed to say that she saw no less than four clouded yellows at Ffos-las near Trimsaran this afternoon...perhaps there may be some migrant moths around too? Not ideal trapping weather, but it may be worth trying. It seems a bit cloudier tonight, if slightly breezy (at 7.45pm), so I may put out a garden trap.

Postscript: Well, I did put out the traps with my MV going on the seat (see below) next to the shrub mentioned above. There was a very strong smell of honey as I walked towards this shrub, something that I have n`t noticed before and it is probably this that attracts the noctuids. Returning back up the path, another strong smell was obvious - that of tobacco plants (see pic), which I have deliberately planted in case we have a late summer/autumn immigration of convolvulus hawk-moths. Fingers crossed! 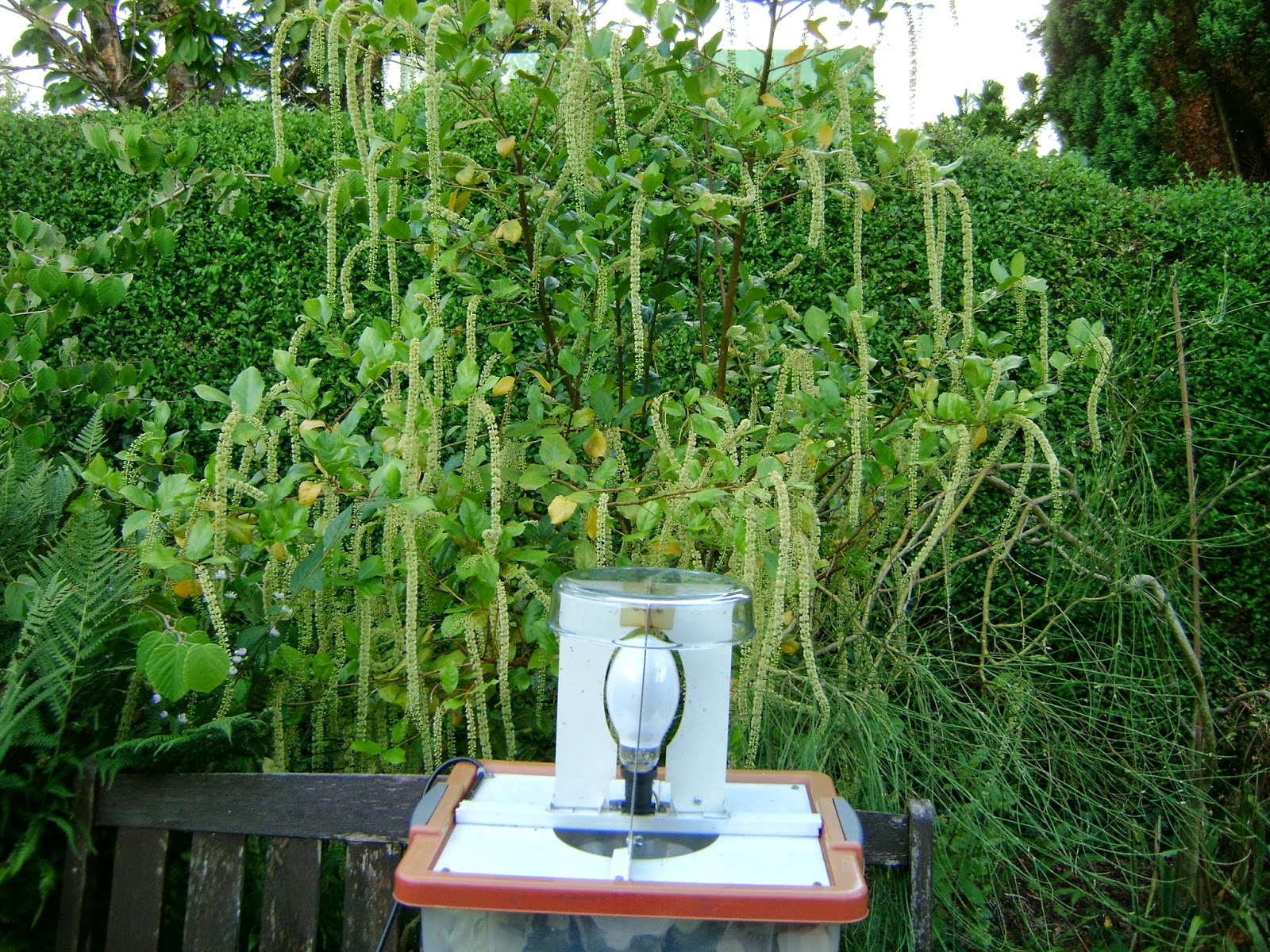 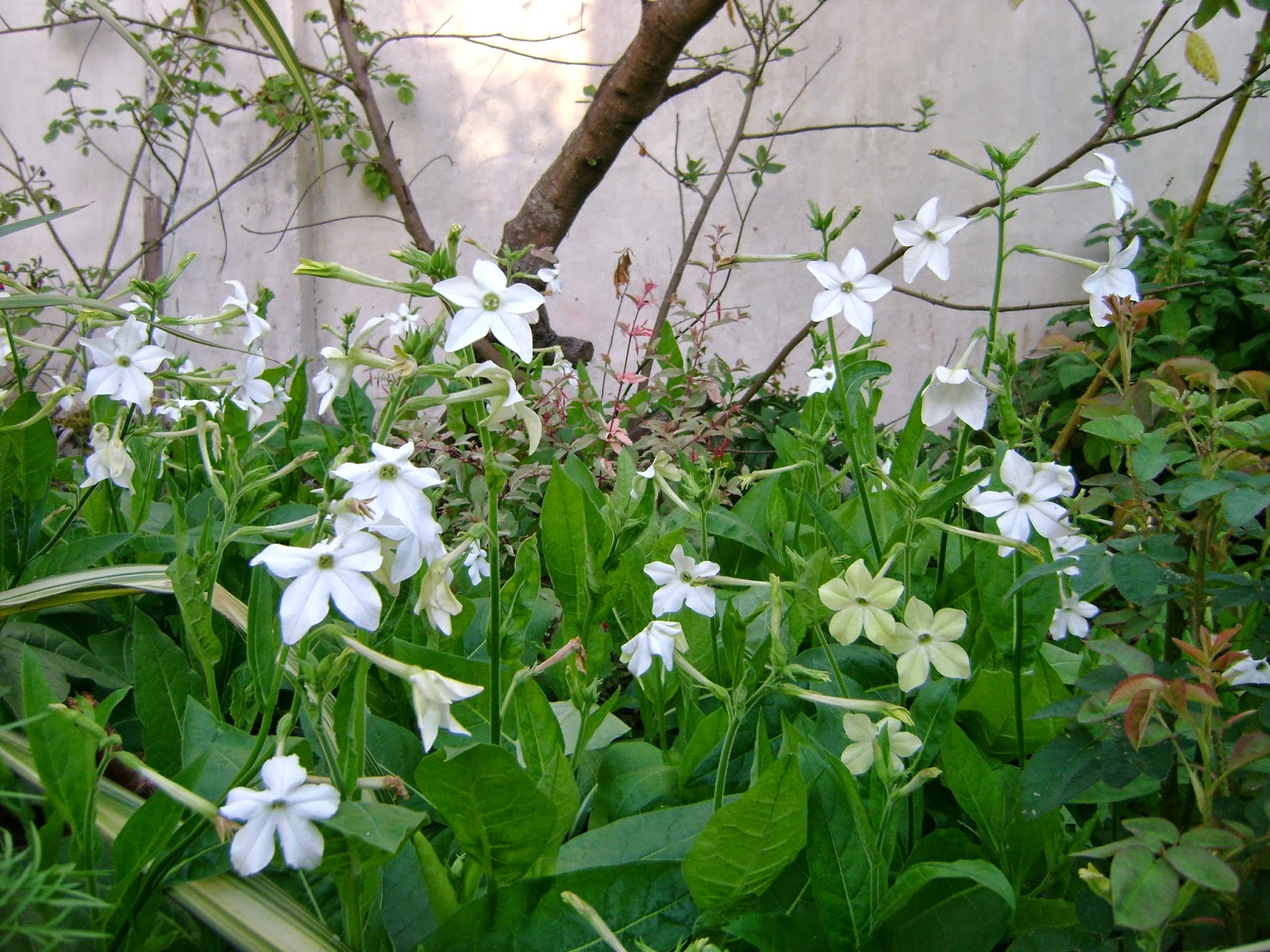