We went today to the high cliffs above Llyn y Fan Fach, in the western Brecon Beacons, and the highest point (c 780m) in the three counties of SW Wales. The aims were to search for a particular rare plant (not seen since 1983), to look for a particular moth and, finally, to search for rusts on the rich assemblage of upland plants that adorn the high cliffs. We succeeded in finding the moth (to be named later), and I hope that the photos below convey both a feeling of this very special wildlife-rich upland site and the effort that sometimes is needed to find your target species. 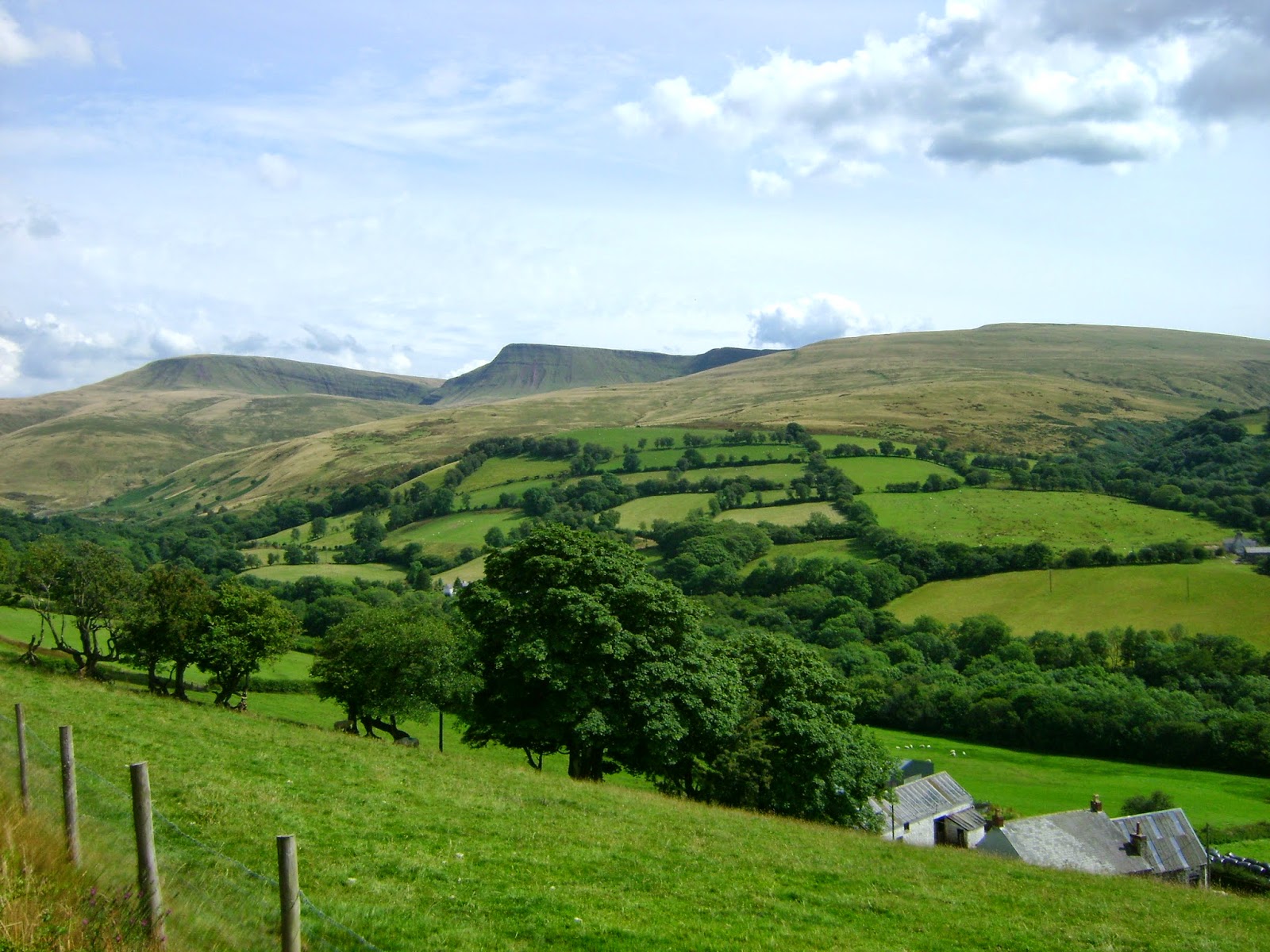 Above: the distinctively-shaped Fan Foel can be seen from many parts of Carmarthenshire and the boundary with Breconshire lies astride its crest. 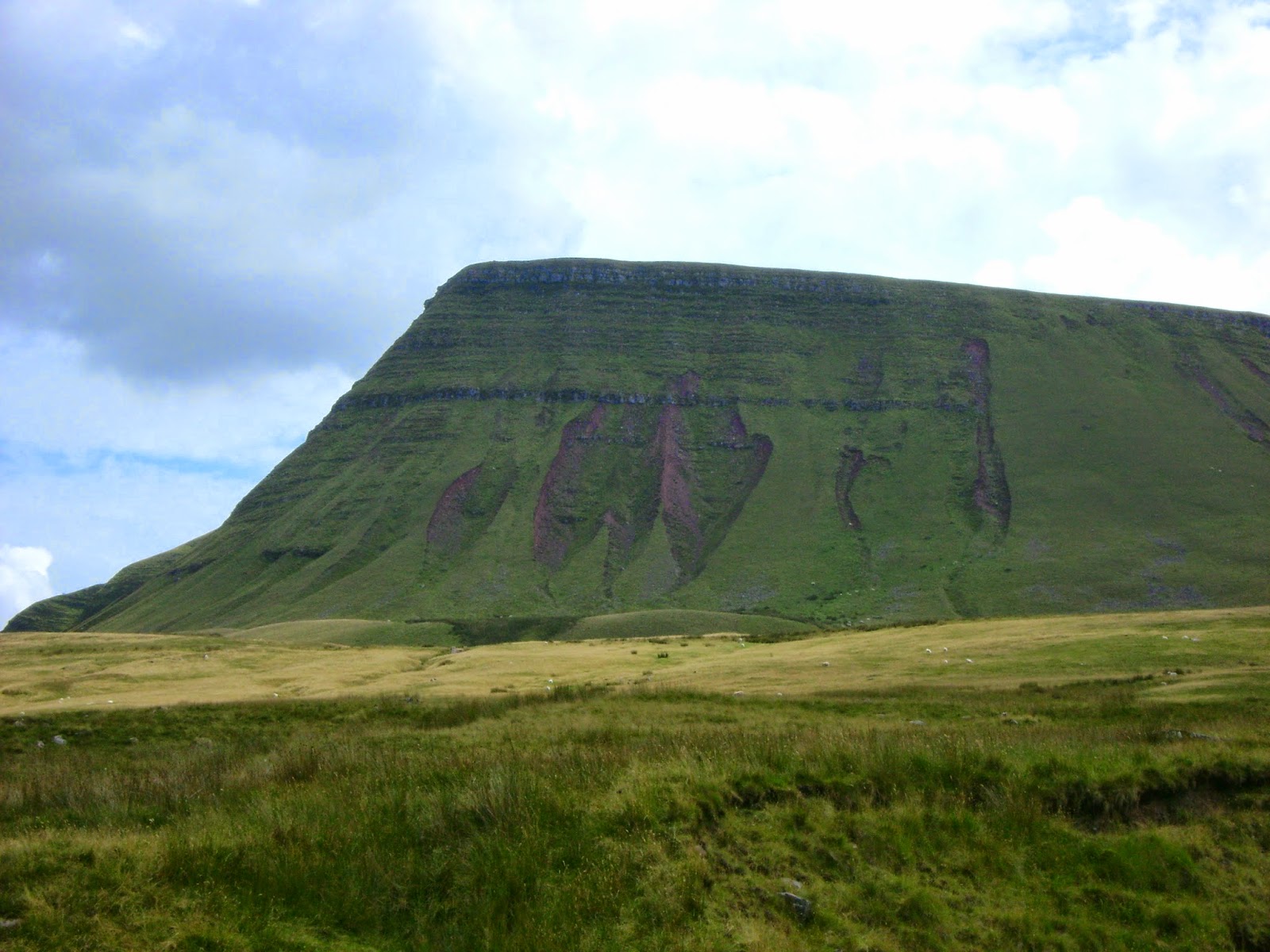 Above: a sideways view of Fan Foel itself, with the horizontal layers of Old Red Sandstone, red as this rock was laid down from sediments from arid areas that were iron-rich, hence the red colour. 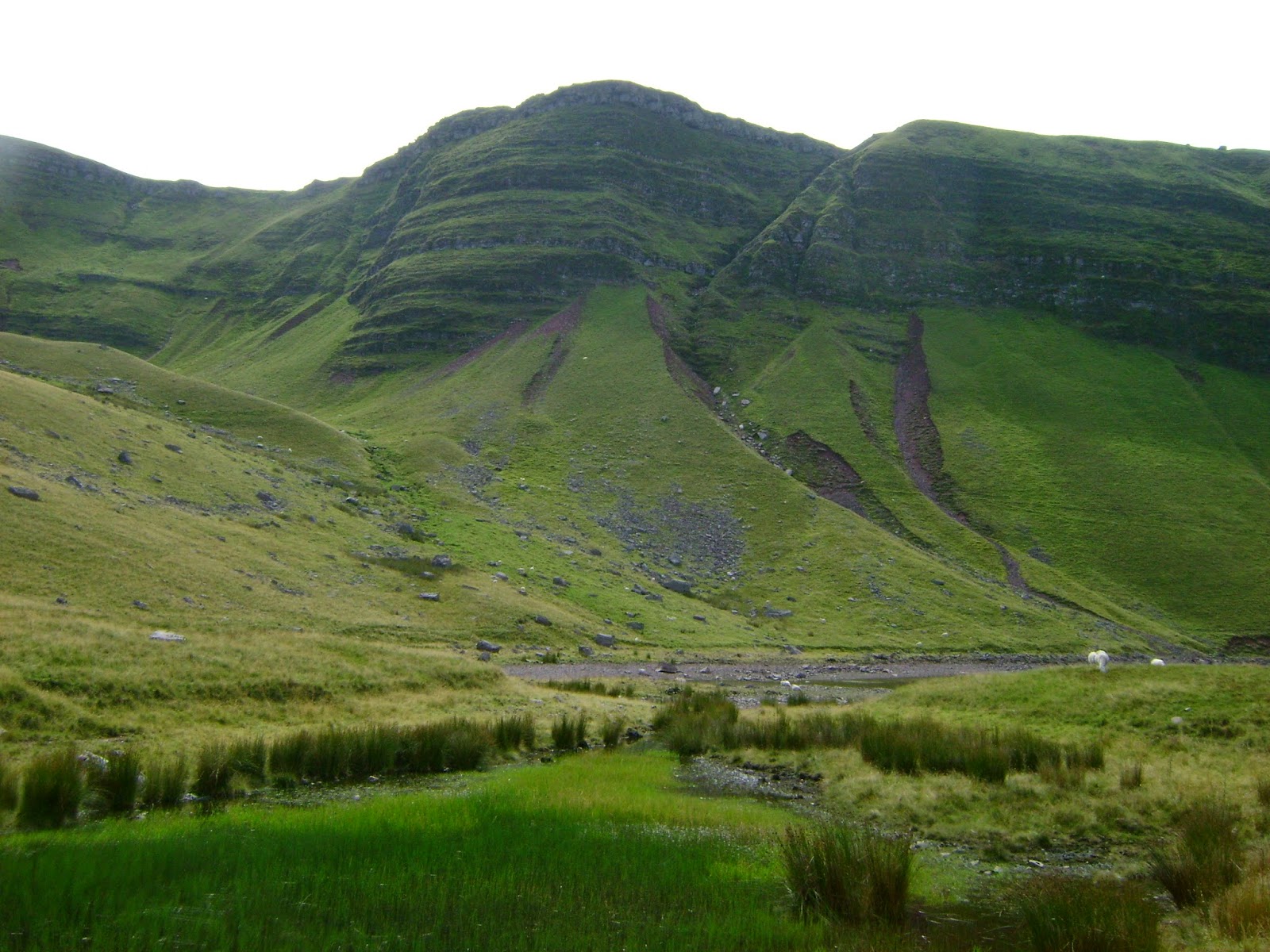 Above: the towering cliffs before us, reached after a trek up a long track from the car park below. The botanically-interesting areas lie on the steep, rock outcrops, away from grazing sheep. The route was to take us up the gully that forms a diagonal cleft in the cliffs. 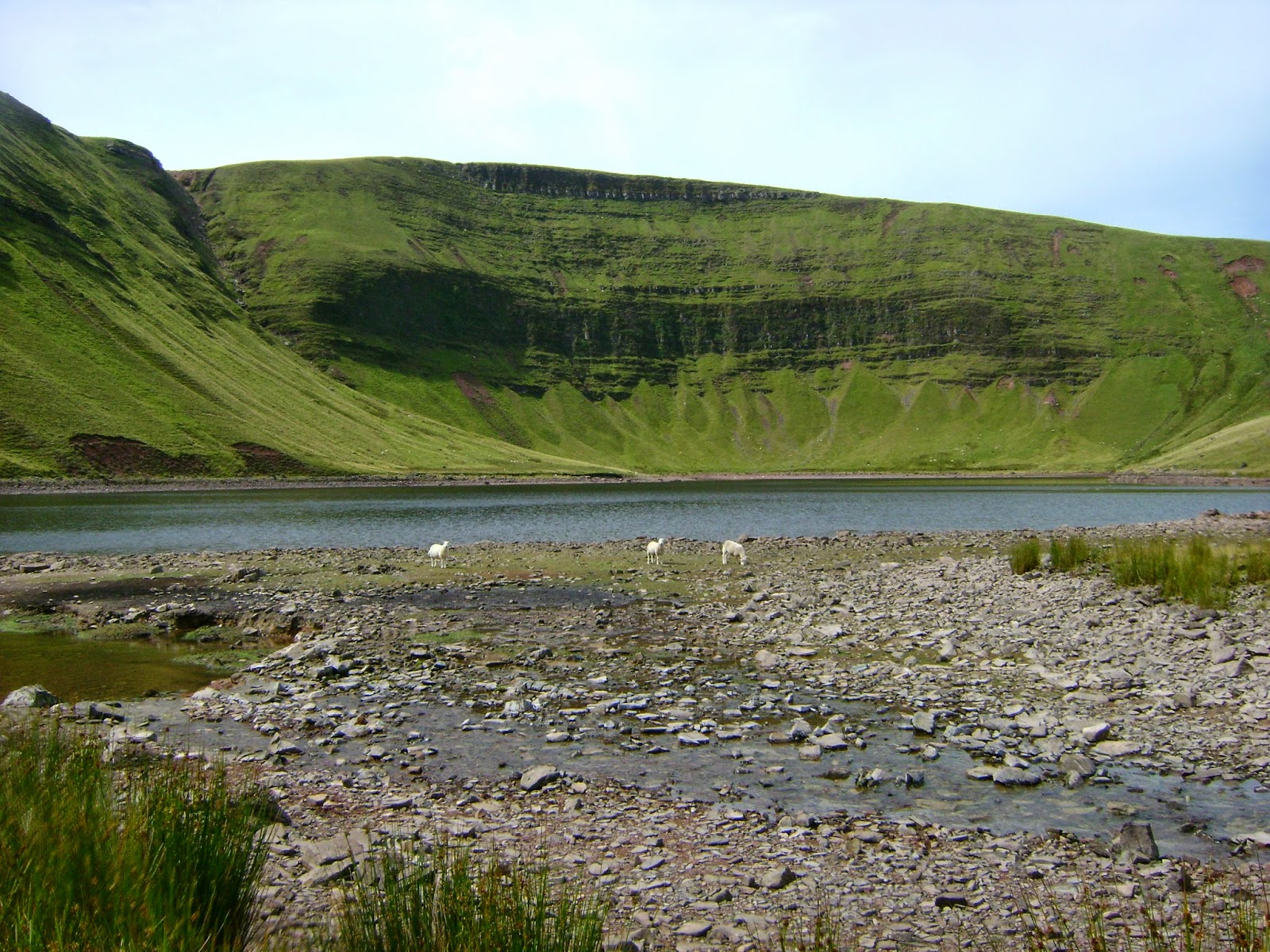 Above: a view of the lake, home to the legend of `The Lady of the Lake`, a tale that every Welsh child was taught at school. 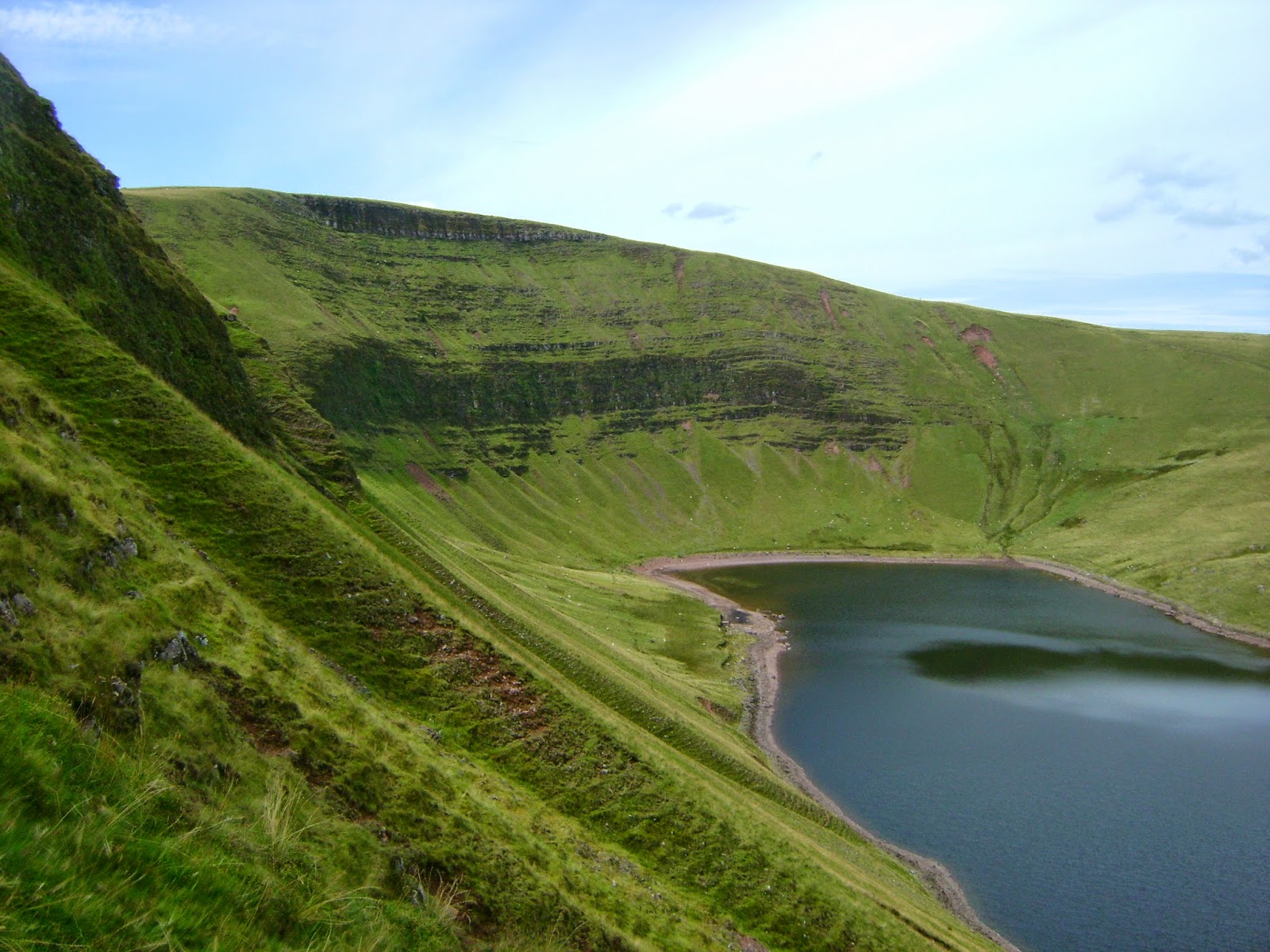 Above: at the top of the grassy talus slopes and just below the cliffs, getting steeper and feeling higher up than the photo conveys - one slip and you won`t stop rolling and bouncing to the bottom! 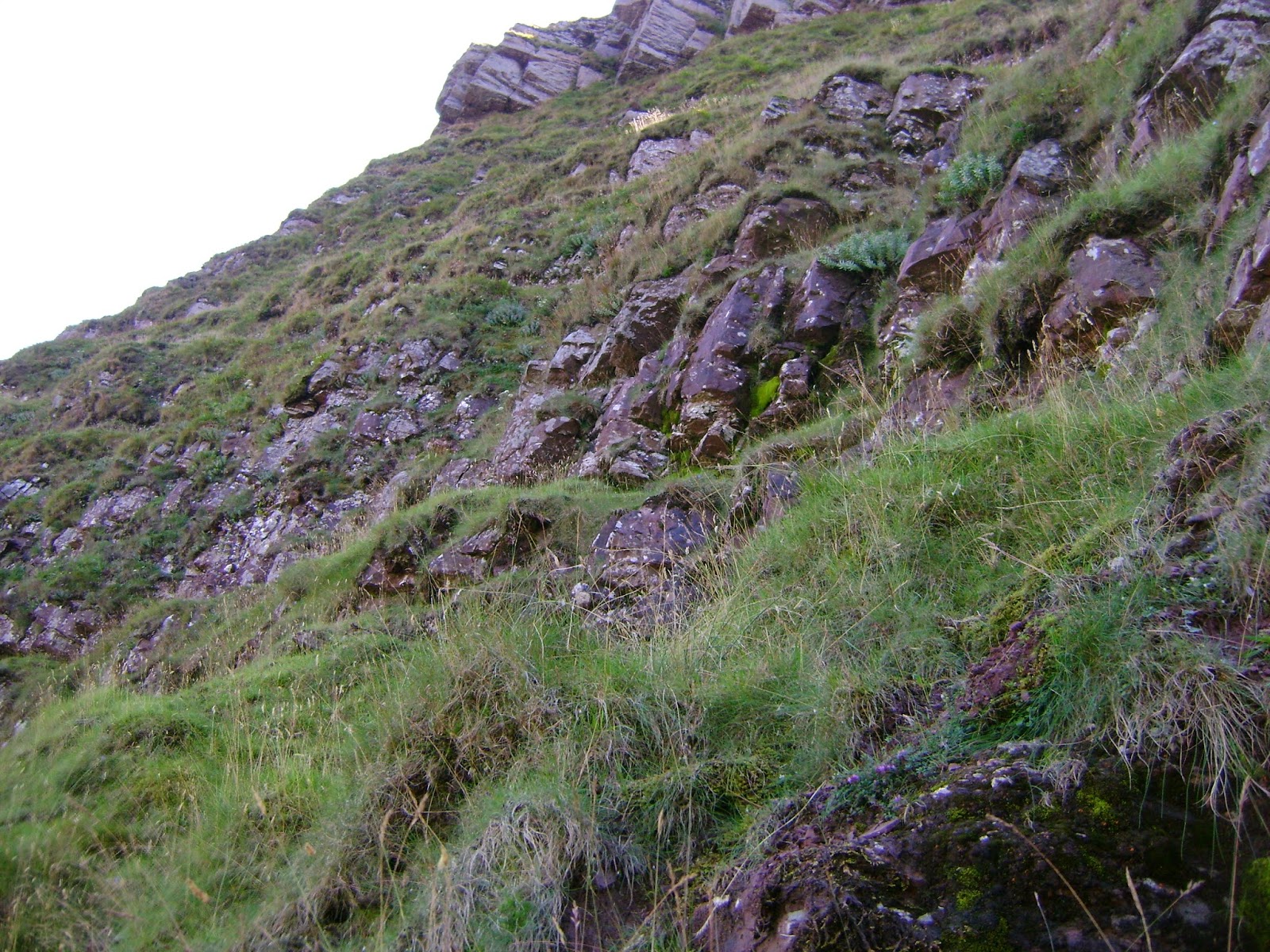 Above: getting steeper...looks easy, does n`t it? - but there`s rare plants in view, as its too steep even for sheep to reach. Care was taken when inspecting this area - and there was a dead sheep nearby that had fallen. 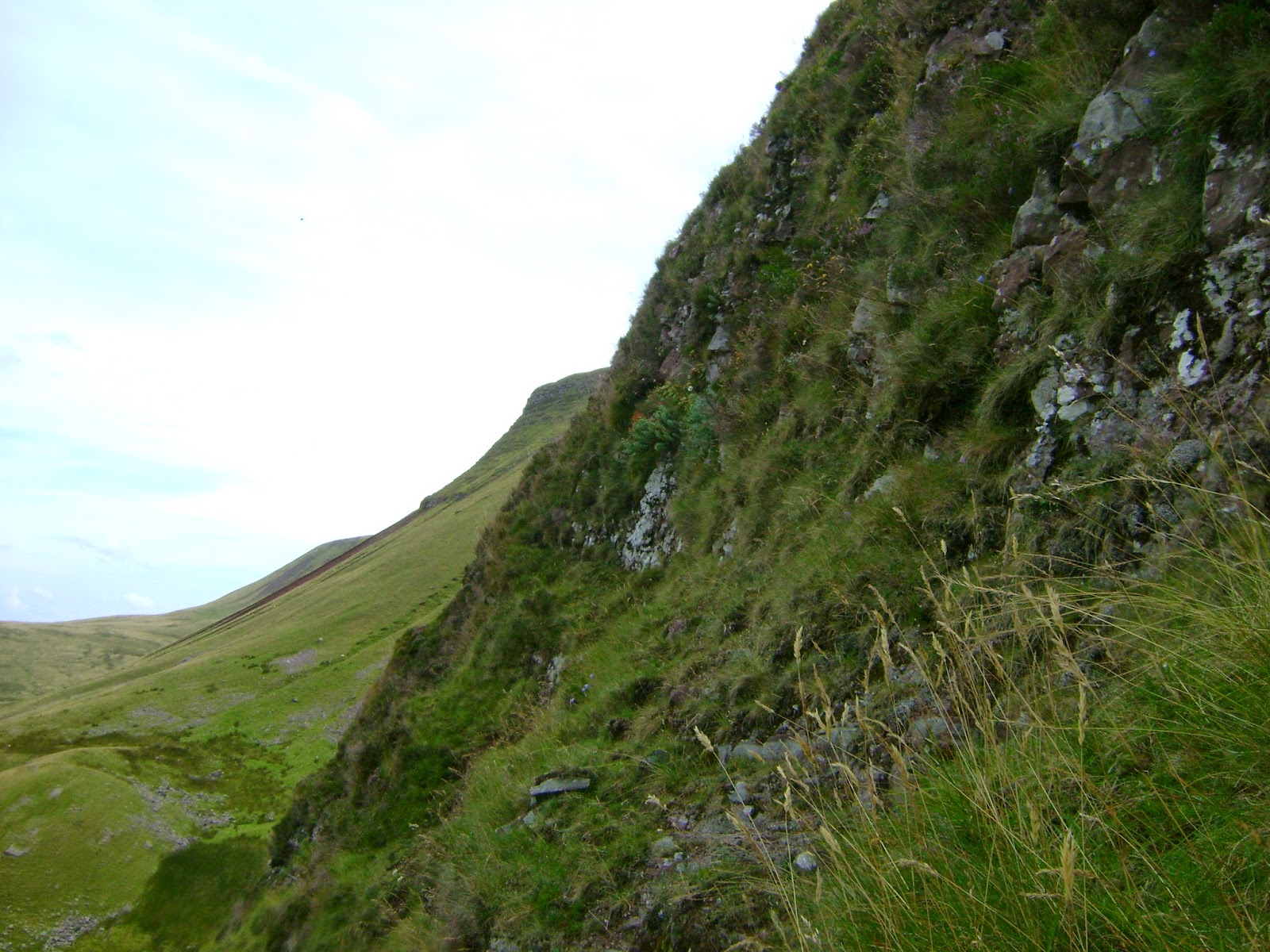 Above: also on the steep slopes - lots of moths were seen flying over this (and other) areas, but catching these swift-flying moths was both difficult and dangerous. 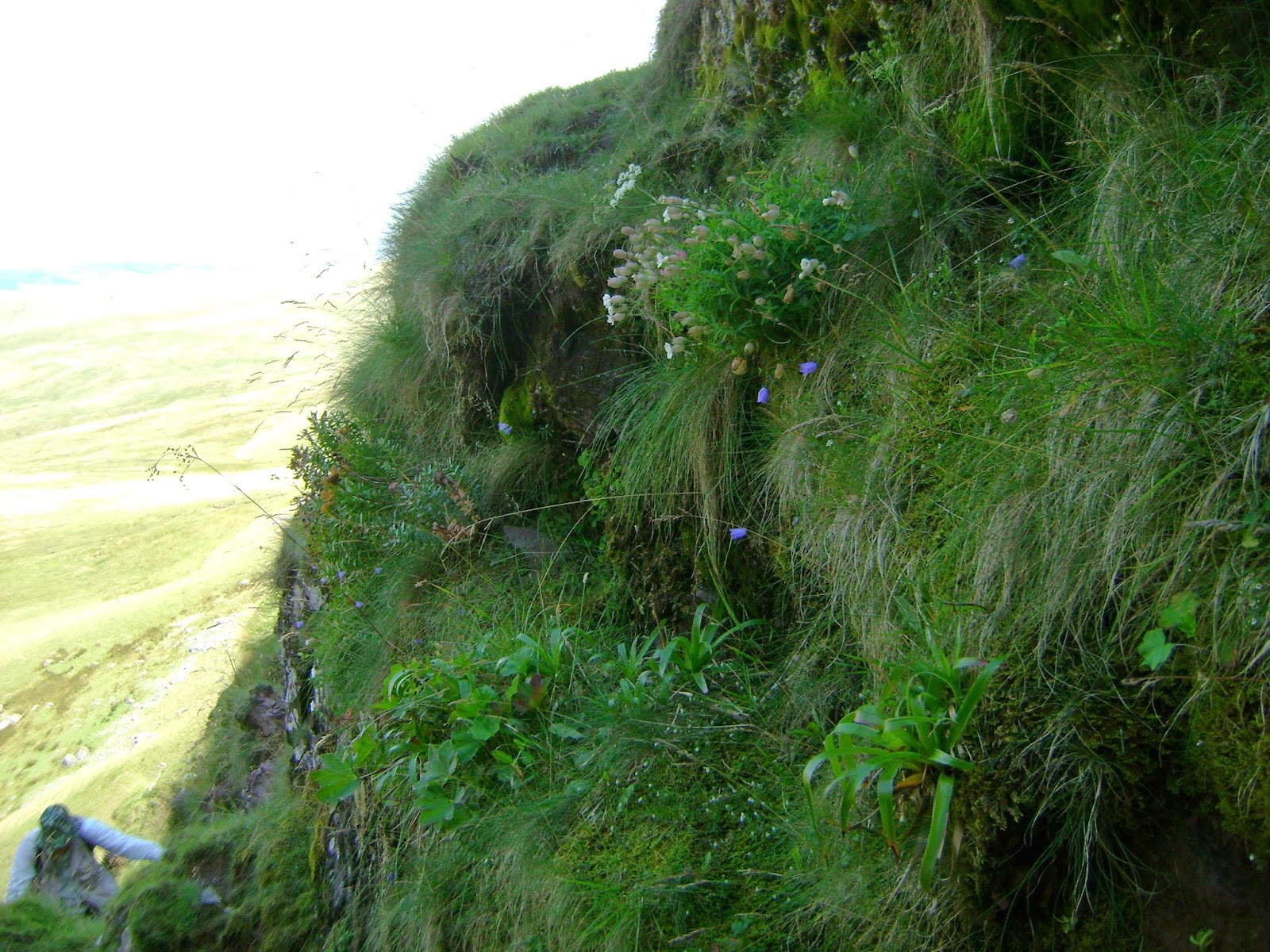 Above: some of the superb flower-rich crags. It was only when I downloaded this photo that I realised that my companion, Nigel `Sherpa` Stringer was also climbing up just below me (see bottom left). 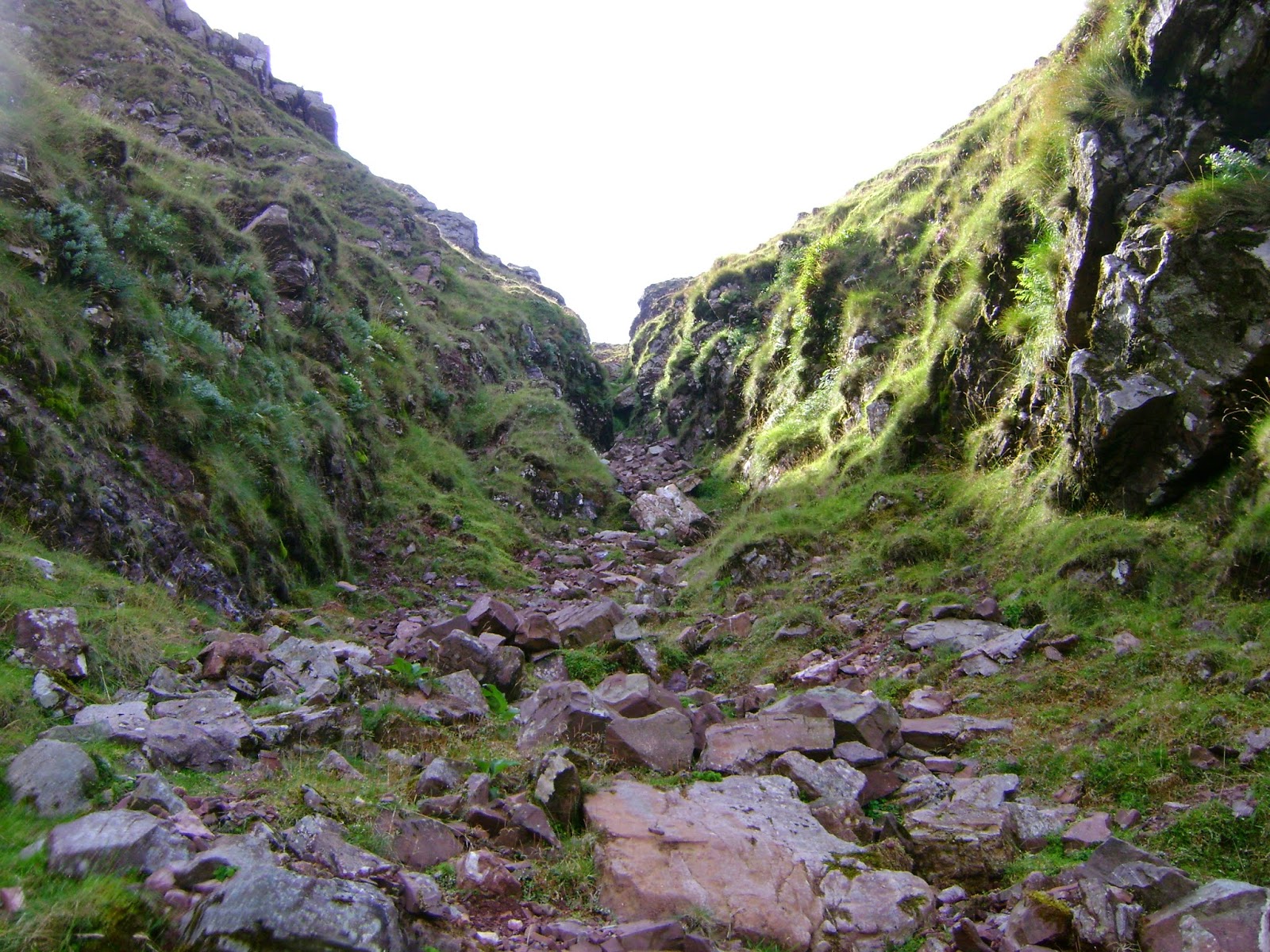 Above: in the ravine, with more steep outcrops festooned with rare plants - just think what regular moth trapping would catch here! Sadly, the site is too distant and difficult for that. There has been a little trapping at the foot of the cliffs though, by myself and also Jon Baker and Sam Bosanquet. 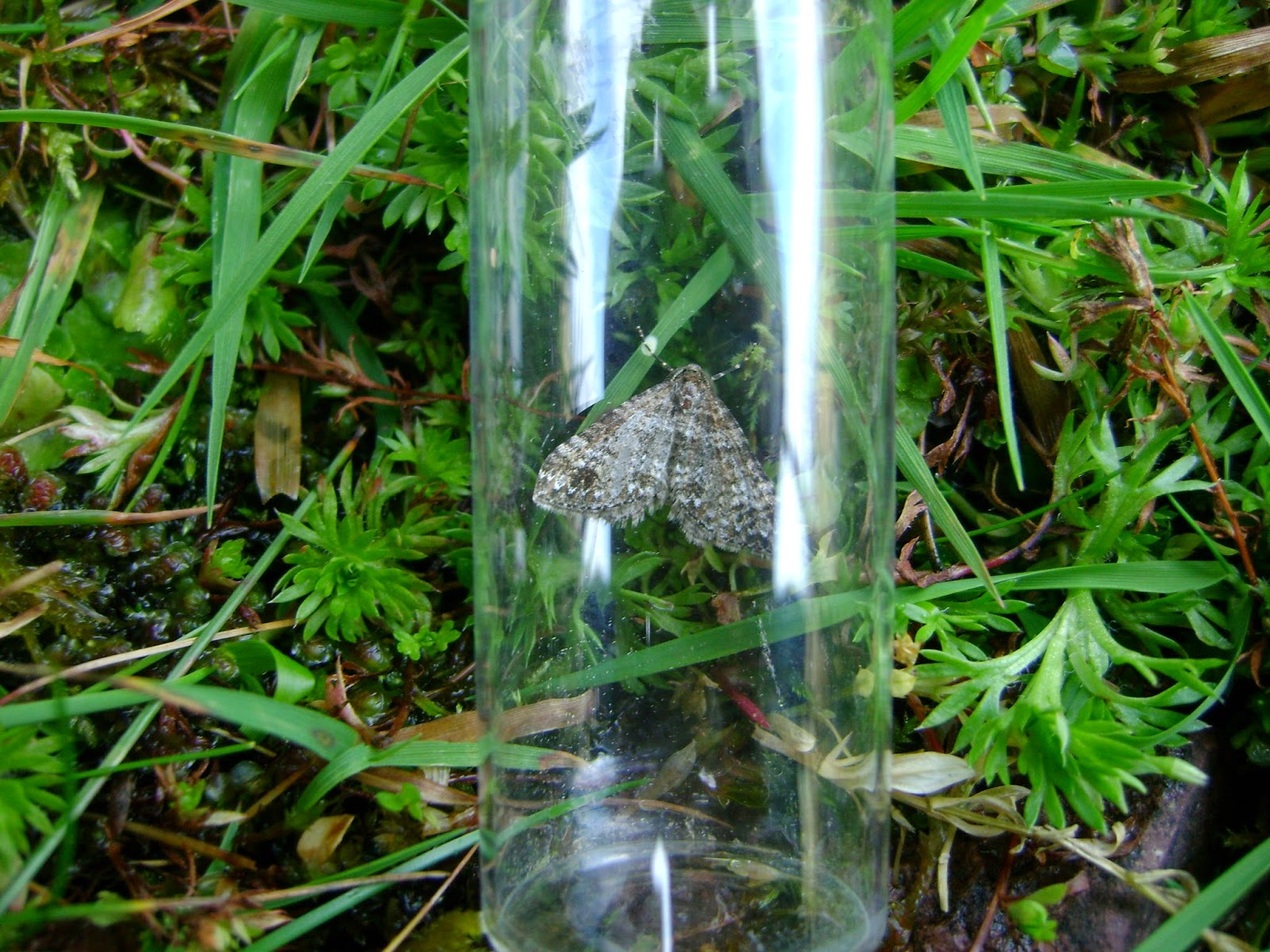 Above: at last! The moth that I was after - and of which we saw many score on the wing - the grey mountain carpet. Some risks were taken to catch this individual! (The botanists among you will notice the mossy saxifrage in the background). NB. Important correction (see comments section below) - the moth has been identified by George as twin-spot carpet, so my reference to GMC in my text should read TSC. Thanks George and sorry for any confusion caused.

The grey mountain carpets were commonly seen on the more vegetated, sheep-free steeper slopes and they will also doubtless be on the cliffs in the adjacent SN72, had we looked. Apart from these many grey mountain carpets, no other moth species was seen (though five common species of butterfly were). I`d first found grey mountain carpets on these cliffs, when I set out an actinic trap at this site in about the early 1990s, and I also recall another daytime visit (in 1991?) when I saw many of these moths on the wing.

Higher up the gully we found our way blocked by a landslide so, rather than take a risky diversion, we descended the way that we came up and left the search for the rare plant (the montane dwarf willow Salix herbacea) for another visit. We did see some of the other botanical riches, such as rose-root. lesser meadow-rue, sea campion, mossy saxifrage, club-mosses, green spleenwort, and many others, often in profusion. Thinking of this profusion, and the plants favoured by certain scarce moths such as thyme (which was abundant), it`s not difficult to fantasise about which moths may be present.
We found some potentially-interesting rusts though, which pleased Nigel.
Posted by Ian Morgan