I thought that I`d better get this posting out of the way, before any future trapping backlog delays matters further. This posting refers to the trapping undertaken on Friday 25th July, at two sites east of Burry Port and with a third trap site at Stradey Woods, Llanelli. I have still got to `process` (photo,i/d etc) quite a few micros, some of which I may post over the next day or so.
The trapping area east of Burry Port comprises sandy grassland (or otherwise dry grassland based on pulverised fuel deposits, PFA, from a former power station), admixed with varied plantings of mostly native deciduous trees and shrubs, together with some pines. It lies on the coast, facing north Gower.
Friday`s exact trapping sites were located at the very edge of a copse with much aspen and alder, with the second site facing the sea (as per photo in the recent `Moths Galore` blog). The first site was prompted by Vaughn Matthew`s find of chocolate-tip in Glamorgan (and, likewise, Barry Stewart`s capture of barred hook-tip at Glynhir last week, made me re-try for this moth under beeches in Stradey Woods -see later). 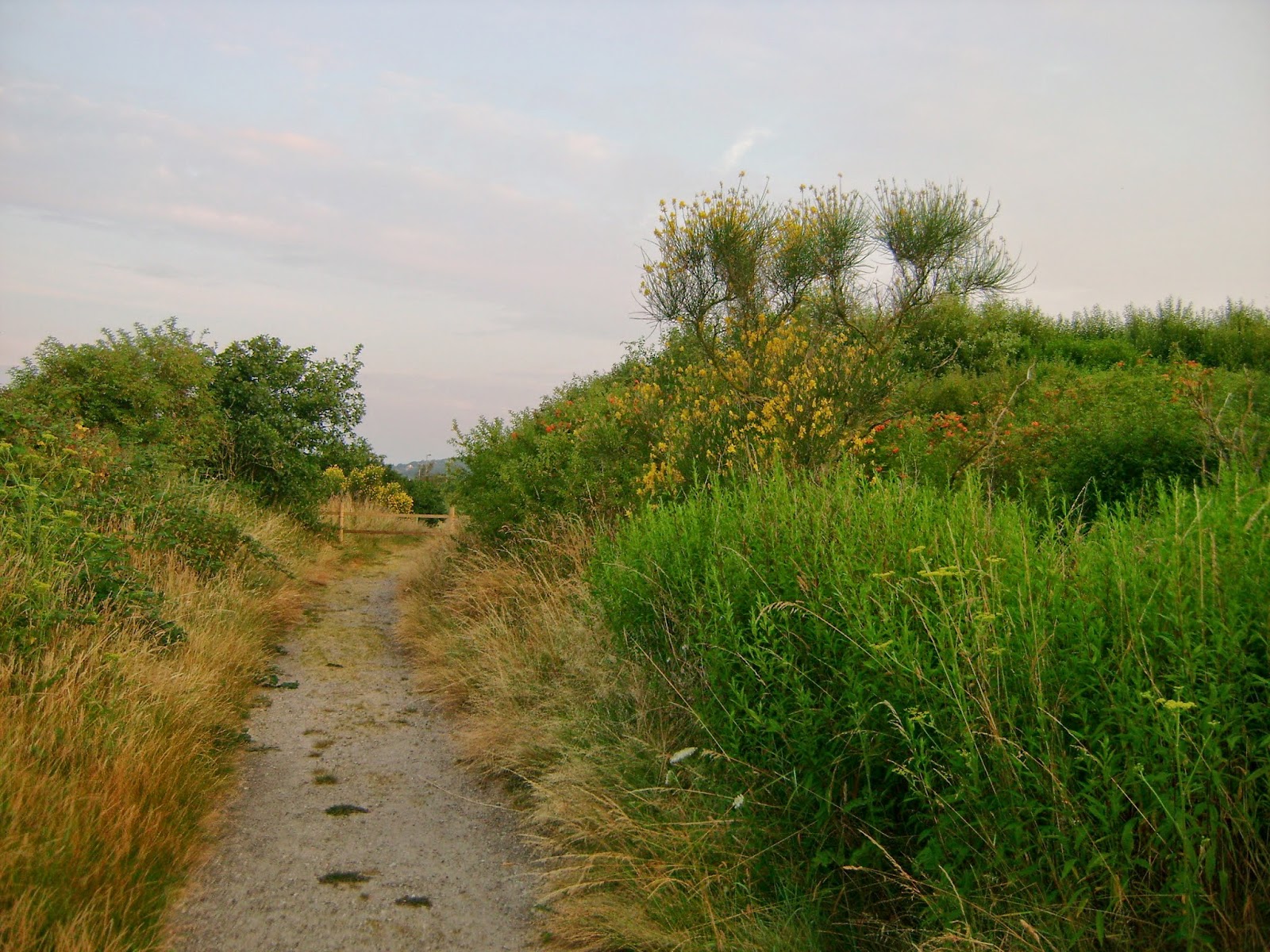 Above: a general habitat shot - dry, sandy grassland with scrub ( with a big patch of Michaelmas daisy on the right). 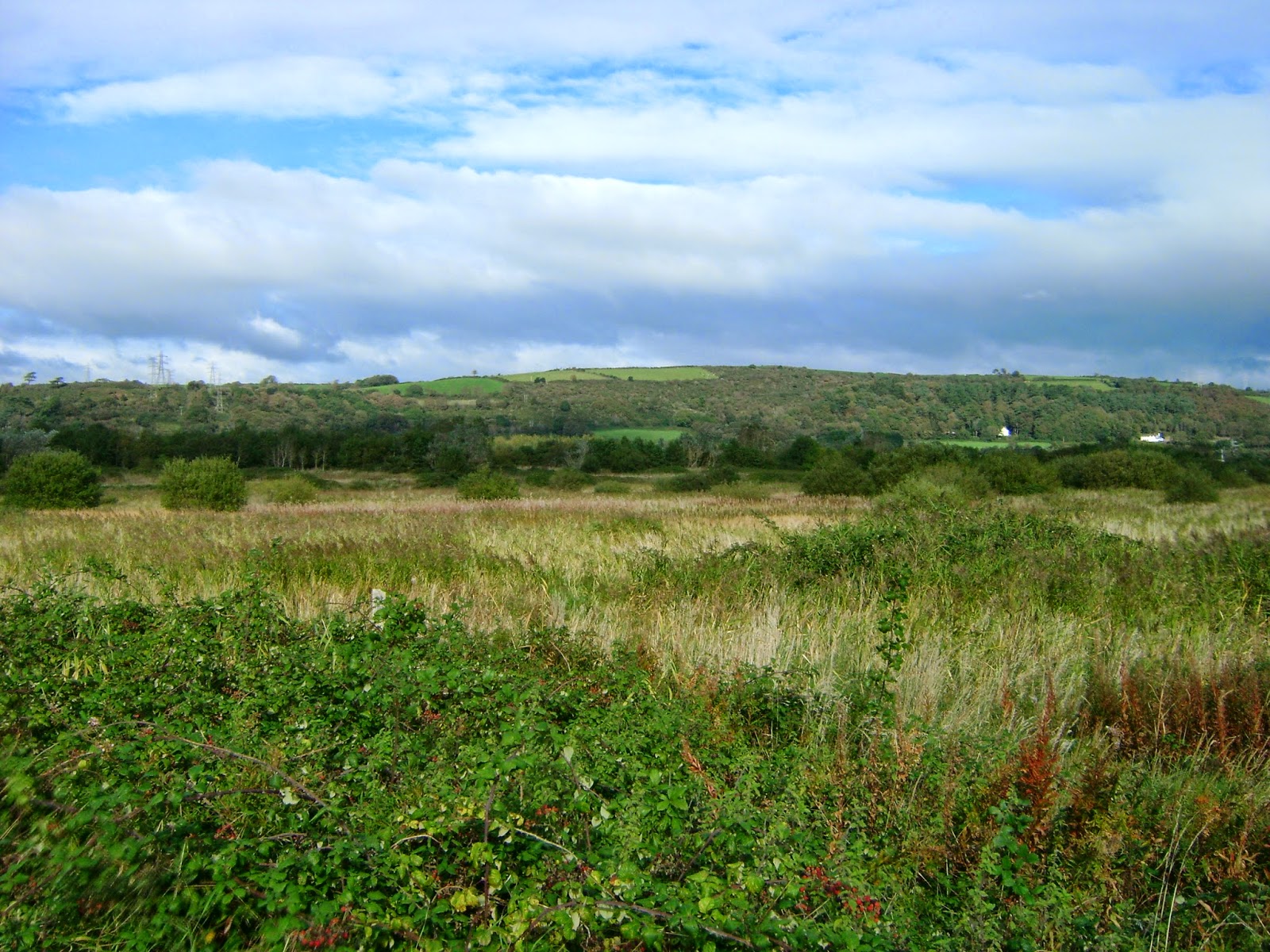 Above: looking c.NE inland towards the ridge behind Pwll.

Moths were in large numbers, and it took considerably longer than usual to check the catch, with the time taken potting up micros to take home, or macros deemed worthy of photographing. To give an example of numbers: sharp-angled peacock (25 & 19 in the two small actinics); shaded broad-bar (31 & 22); smoky wainscot (29 & 12); scarce footman (28 & 18) etc.
I failed in my aim to get a chocolate-tip at the `aspen site` but some of the scarcer or more localised moths caught included small rivulet, white-line dart, brown-line bright-eye, small yellow wave, Chinese character and four-spotted footman. Migrants were represented by dark sword-grass, rush veneer and silver y. Perhaps best of all for me - to participate in friendly competition with `our man on the mountain` (Steve Clarke) - was the capture of dingy shell - in fact twelve of them in the trap next to the aspen/alder plantings.
As noted above, the micros have mostly not yet been dealt with, but a Dioryctia simpliciella (confirmed by Sam) was interesting; it`s a pyralid associated with pines. 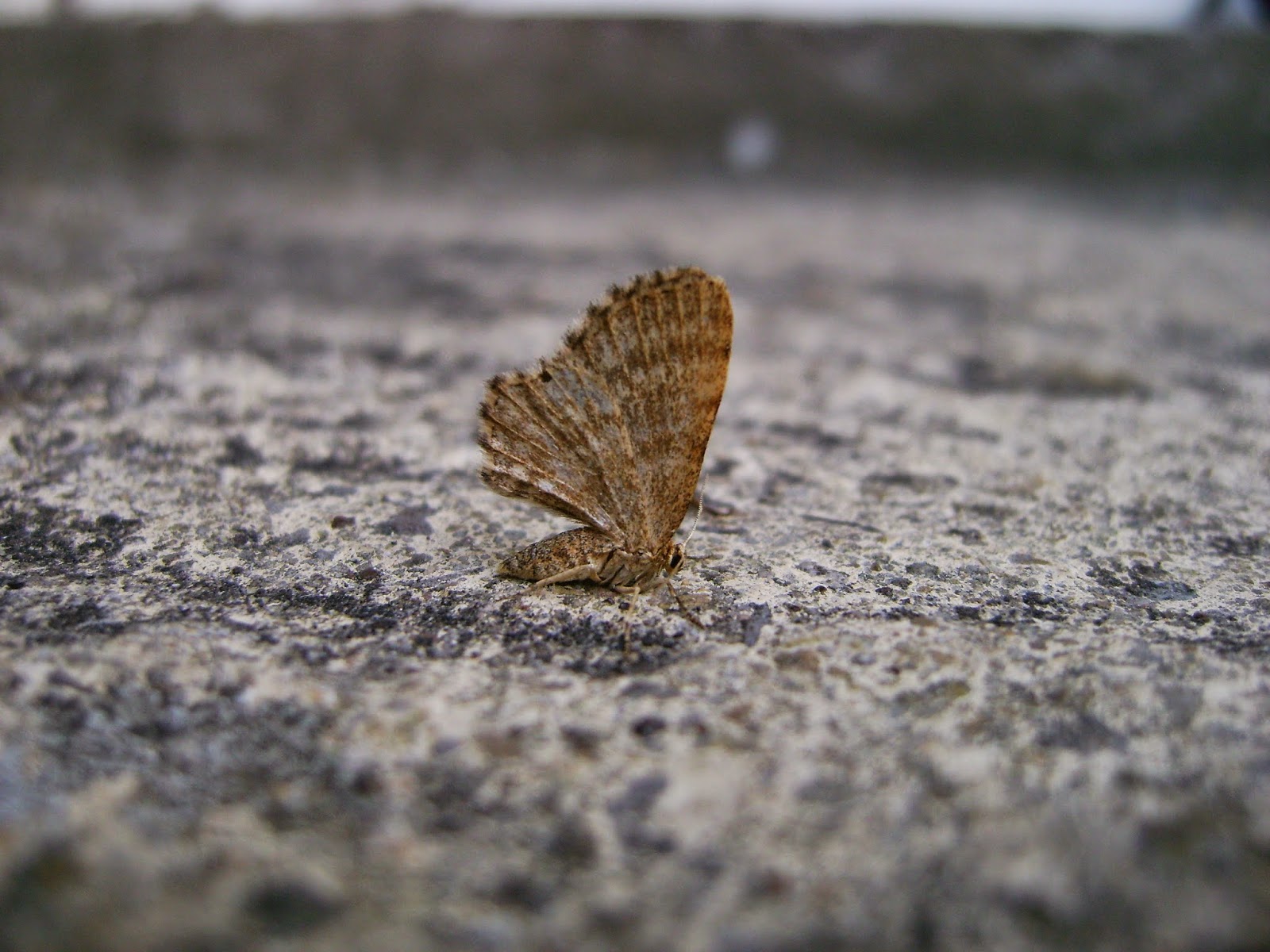 Above: dingy shell in its typical `closed wing` position (associated with alders). 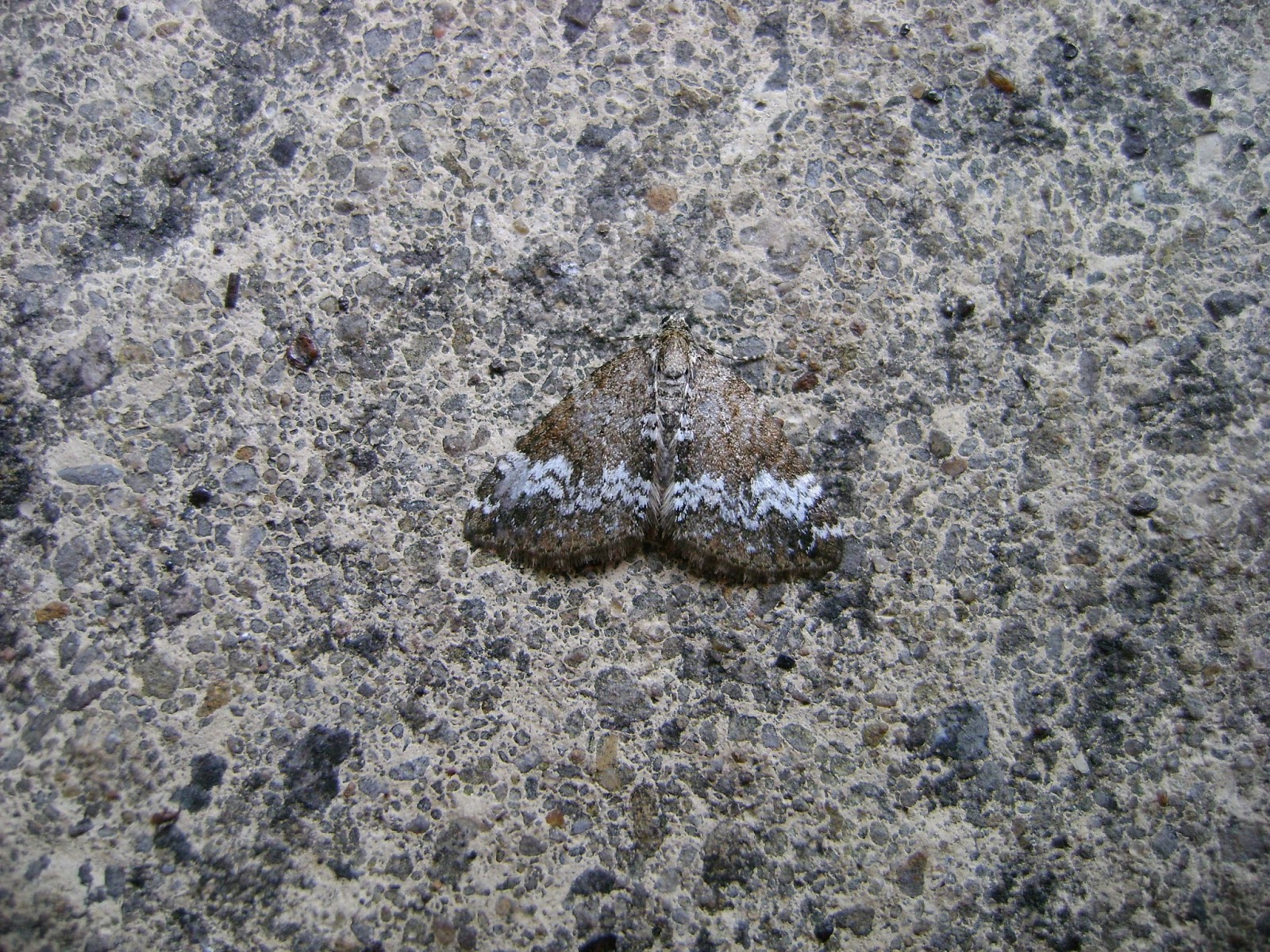 Above: small rivulet: note `double-barring` on the inner edge of the fore-wings. 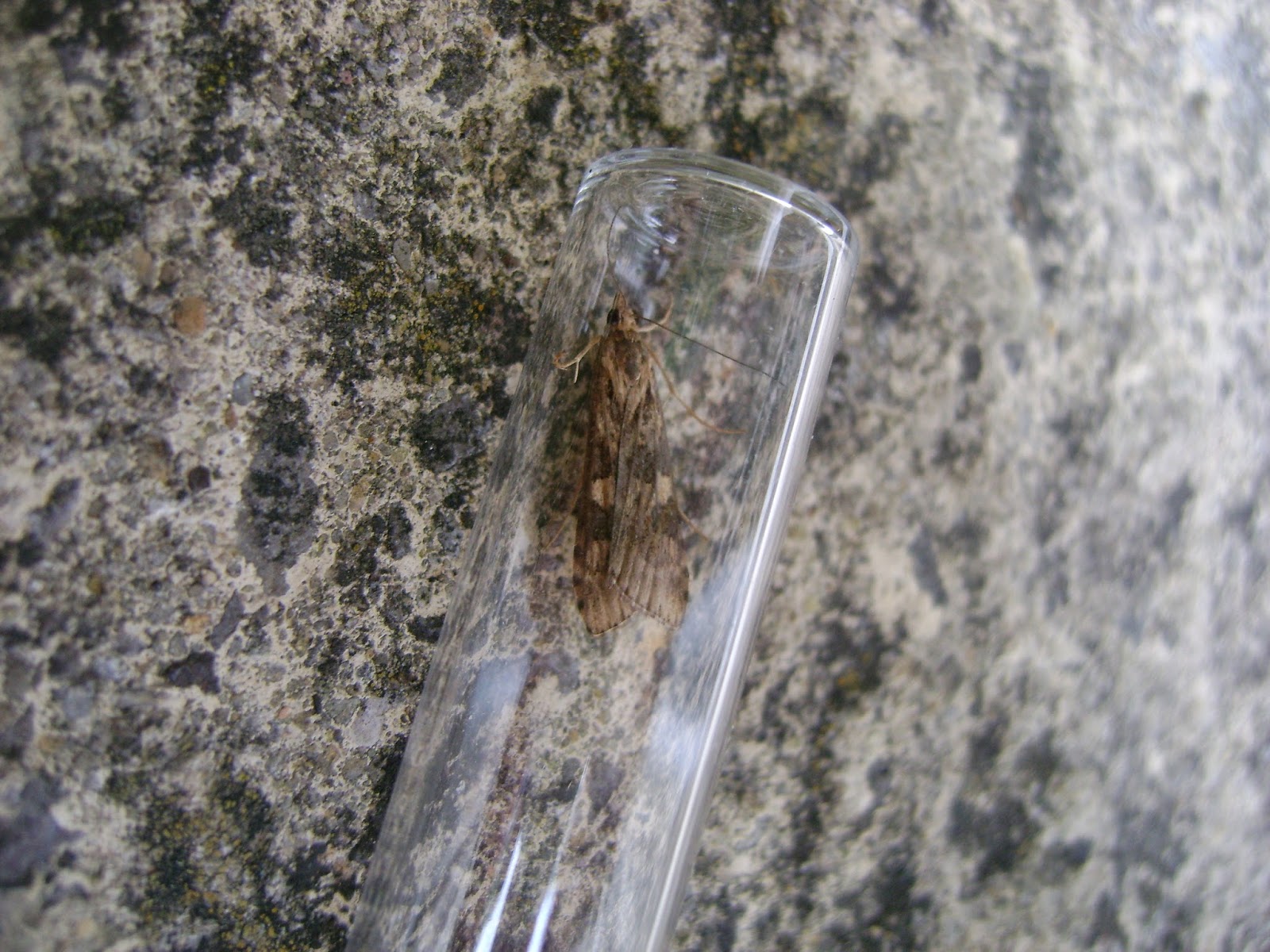 Above: rush veneer, a migrant pyralid. 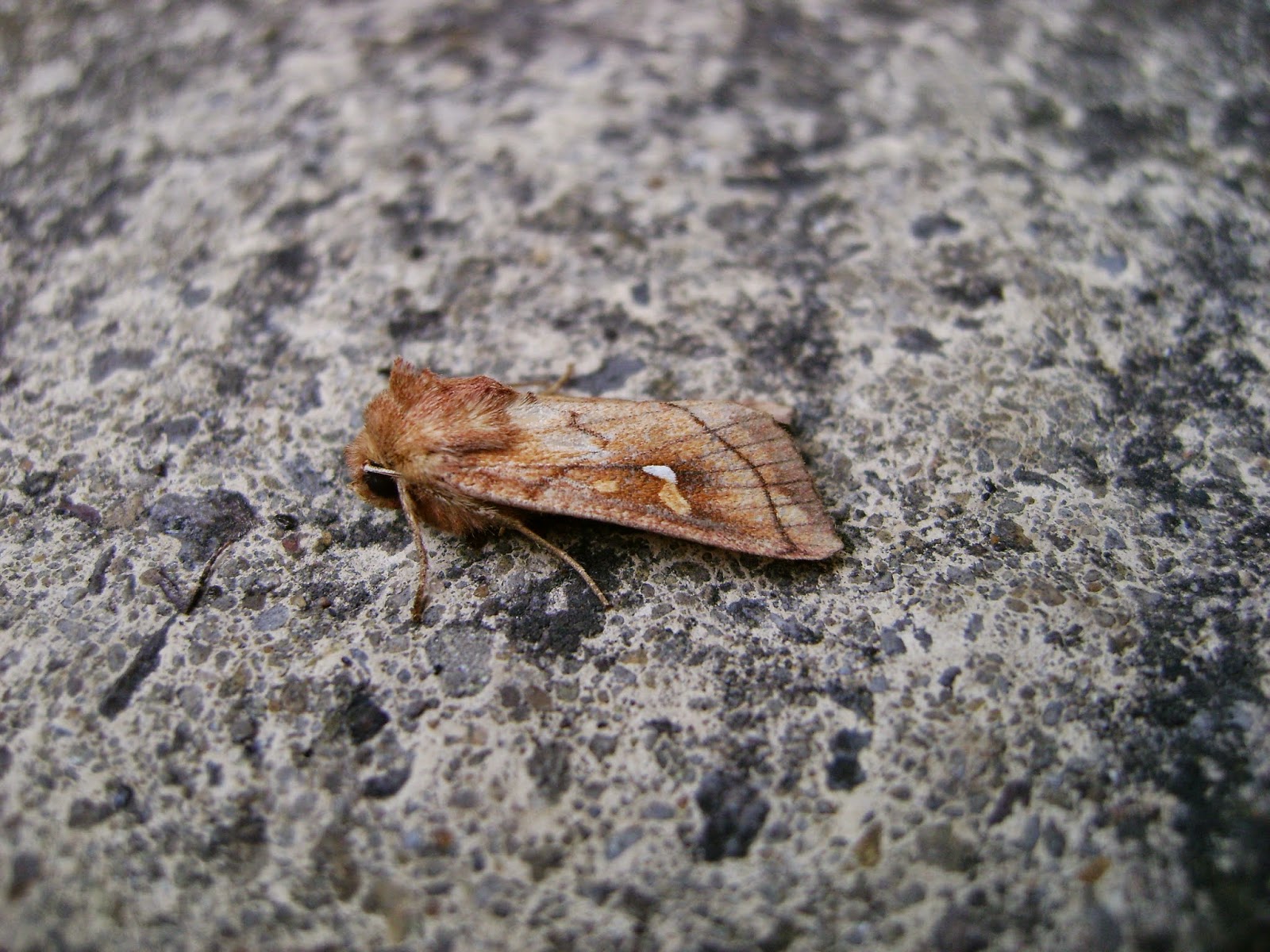 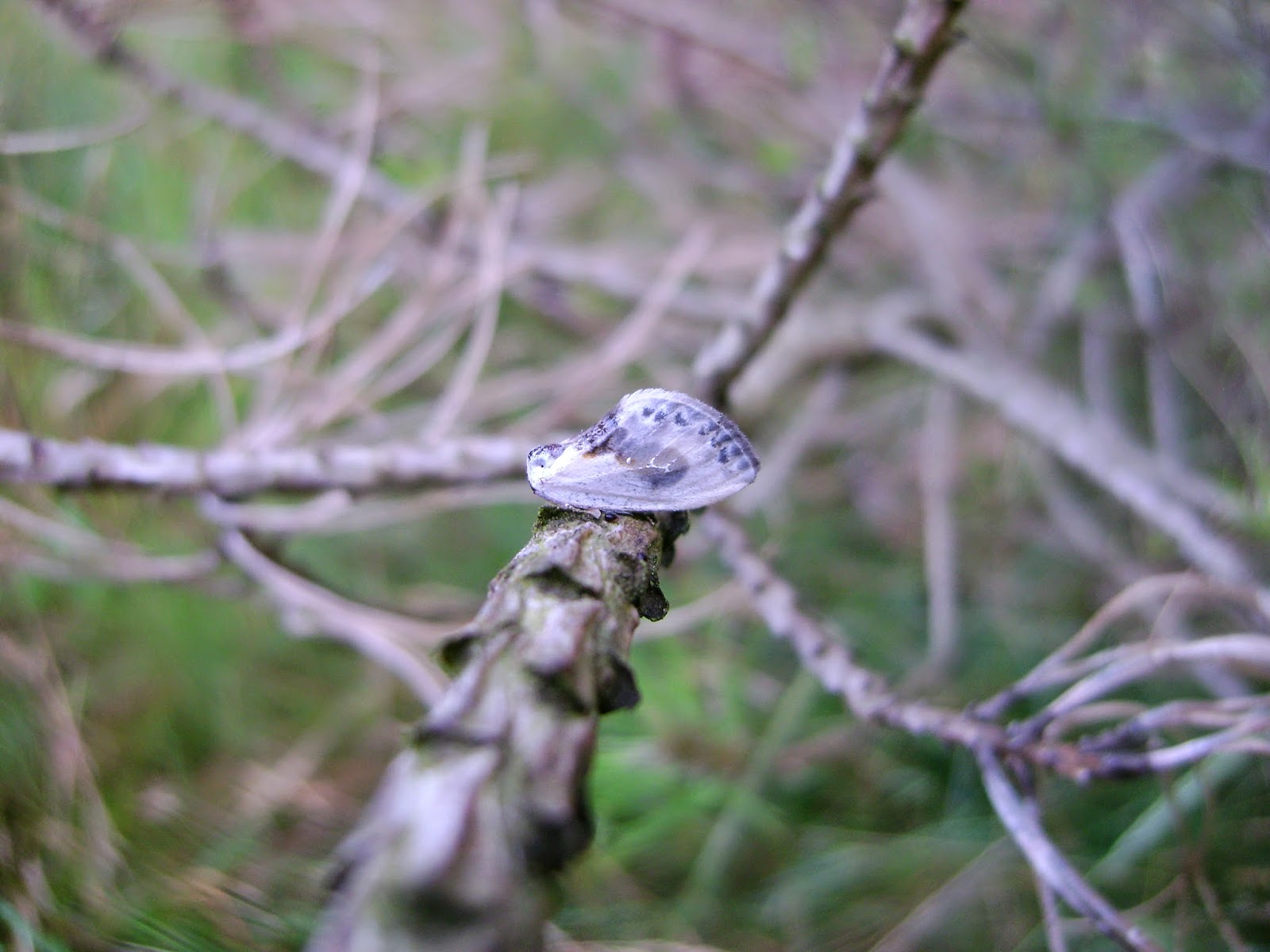 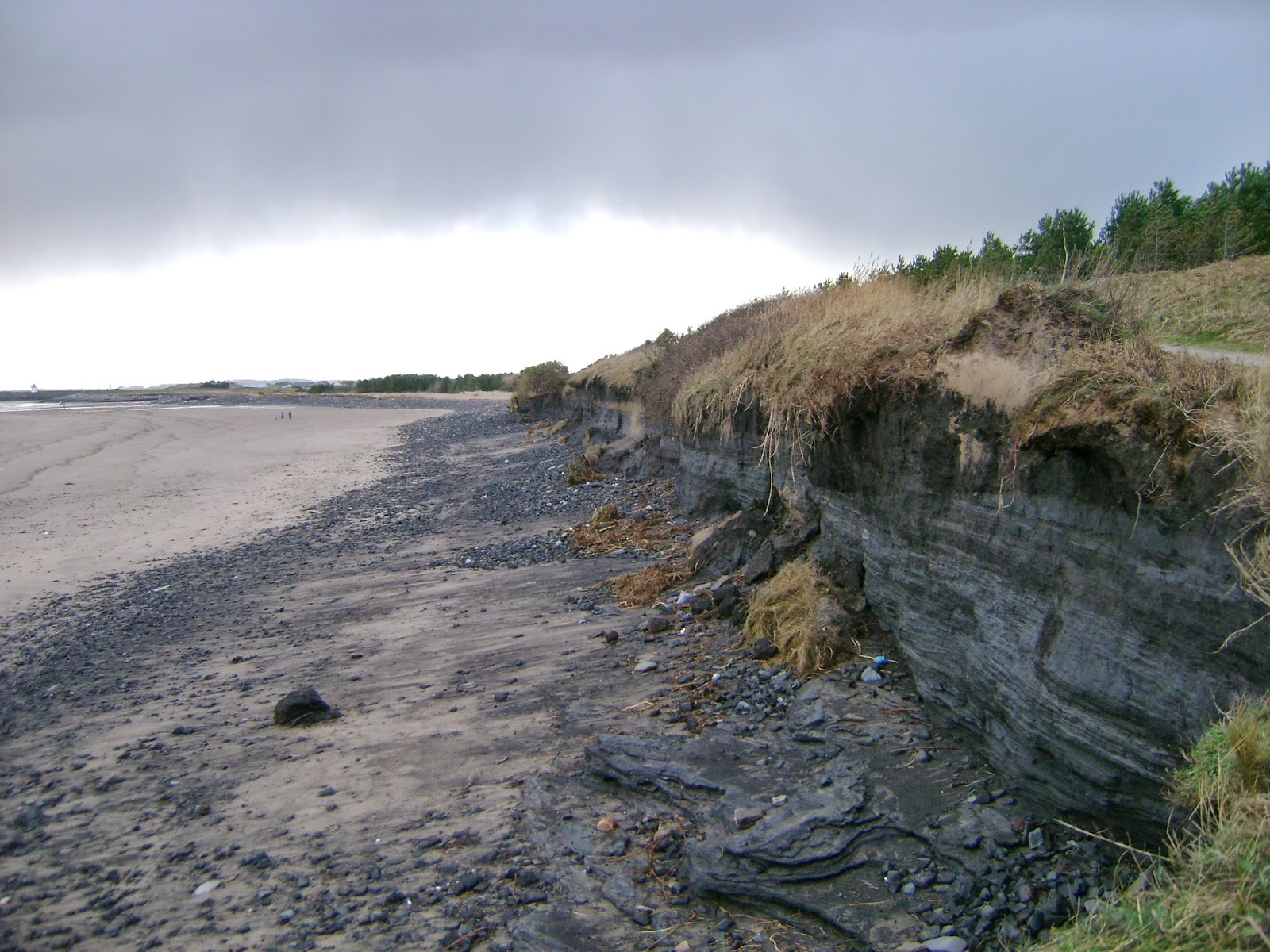 Above: photo taken in January showing storm damage to the PFA cliffs in front of one of my trap sites. Maritime sand martins have a colony on these vertical cliffs.

At Stradey Woods, my main aim was to try for barred hook-tip but none of the `beech boys` (that species and clay triple-lines) were caught, though I`ve had the latter moth in the past. Three useful records were made, however, with the first being three more dingy shells (alders grow on the nearby small river). The second record of note was the discovery of what is probably a breeding colony of four-spotted footmen with eight pristine individuals being caught (3f & 5m). 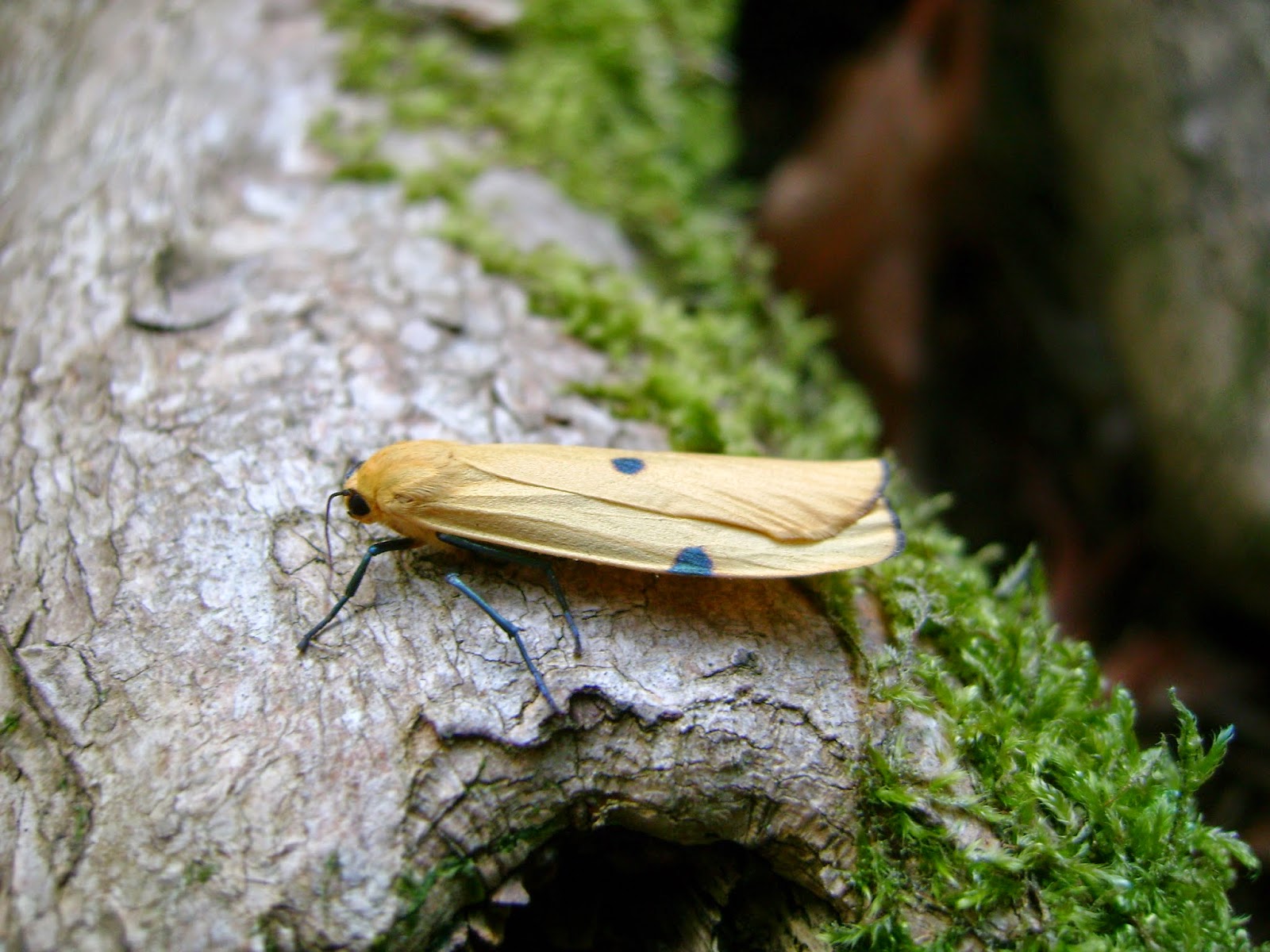 Above: four-spotted footman, one of the Stradey Woods females. 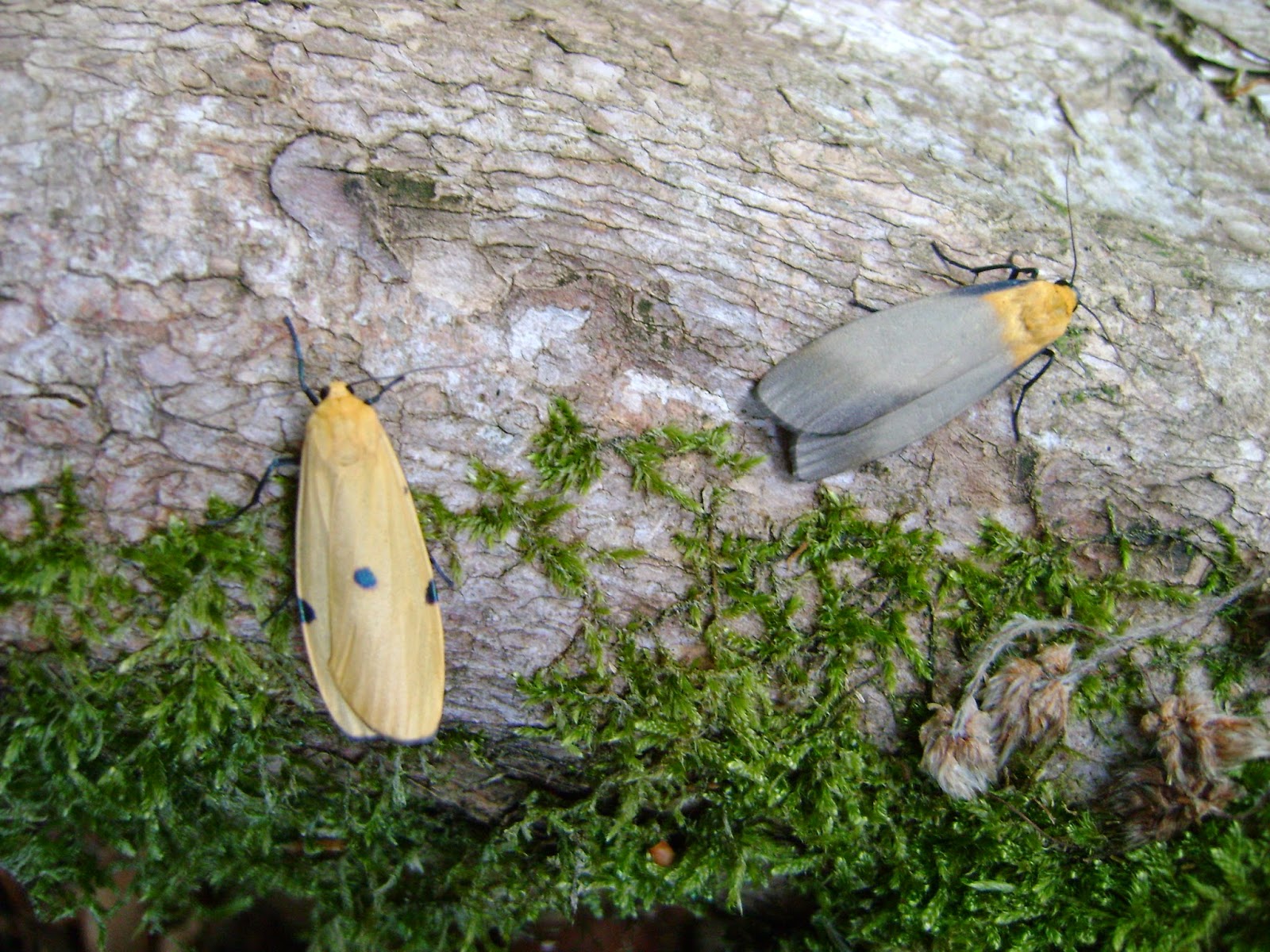 Above: with a male for comparison.

The third species of note caught was a fresh-looking tissue moth, which presumably uses the few alder buckthorns that grow at the edge of the woods. 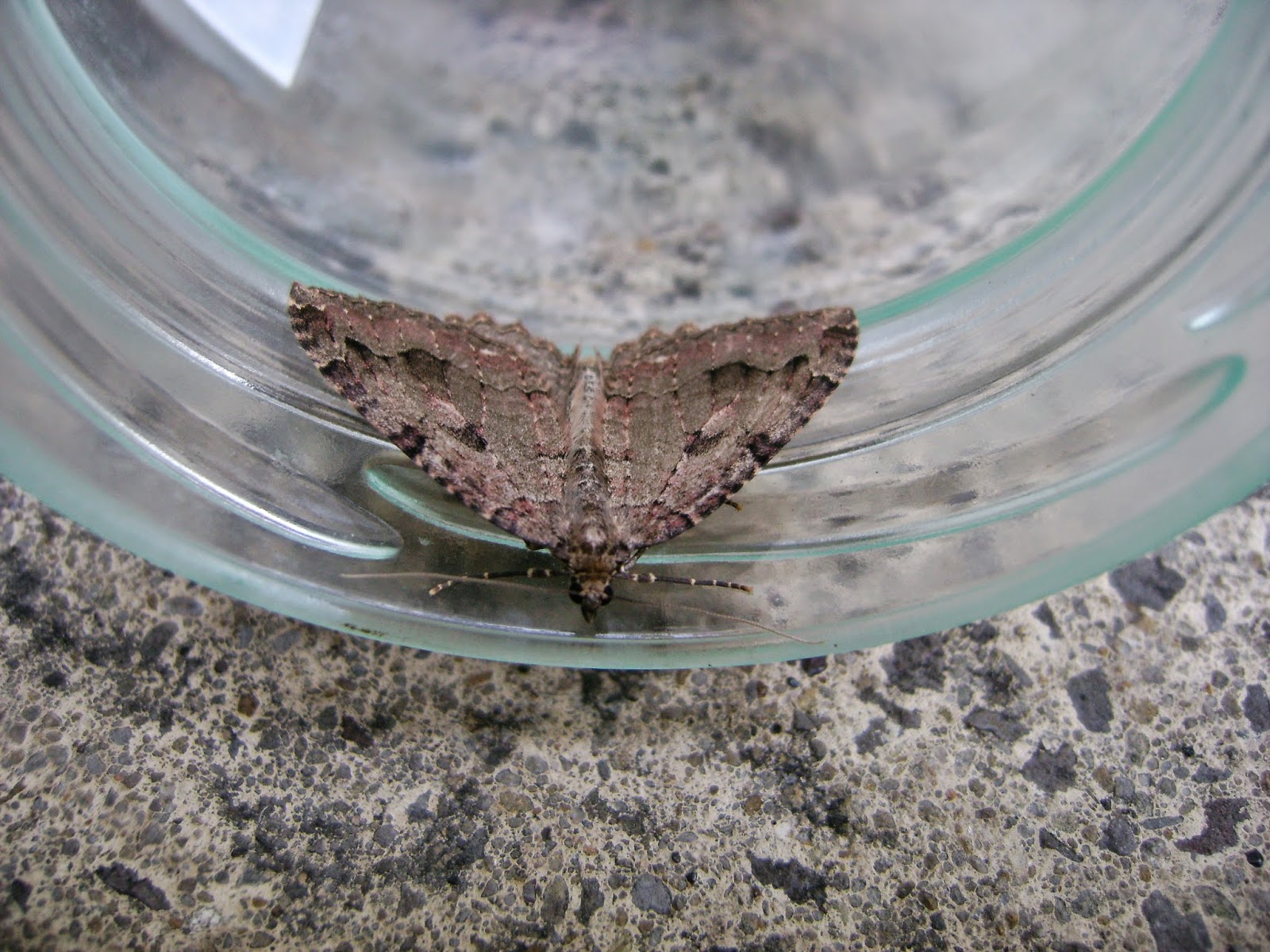 After the above photograph was taken, I tried to place the moth on the underlying concrete slab to take a photo from above, but the flighty creature escaped, flew around my head twice and then entered the partially open door into my kitchen! I anticipated that I`d recapture it easily, but it flew into what used to be a small, partitioned room (an old pantry), where it disappeared. Houdini had gone again! I thought of summoning Mat Ridley, who has experience of this species in the Carmel caves, to lead a search party but decided instead to see if it would re-emerge at dusk, which it did at about 10pm. I was then able to place it in the fridge overnight and take the photograph shown below.
This species, of course, hibernates in old buildings, sheds and caves and when I released it this morning it tried to re-enter the house via a closed window, perhaps seeking out relative darkness for a daytime roost. 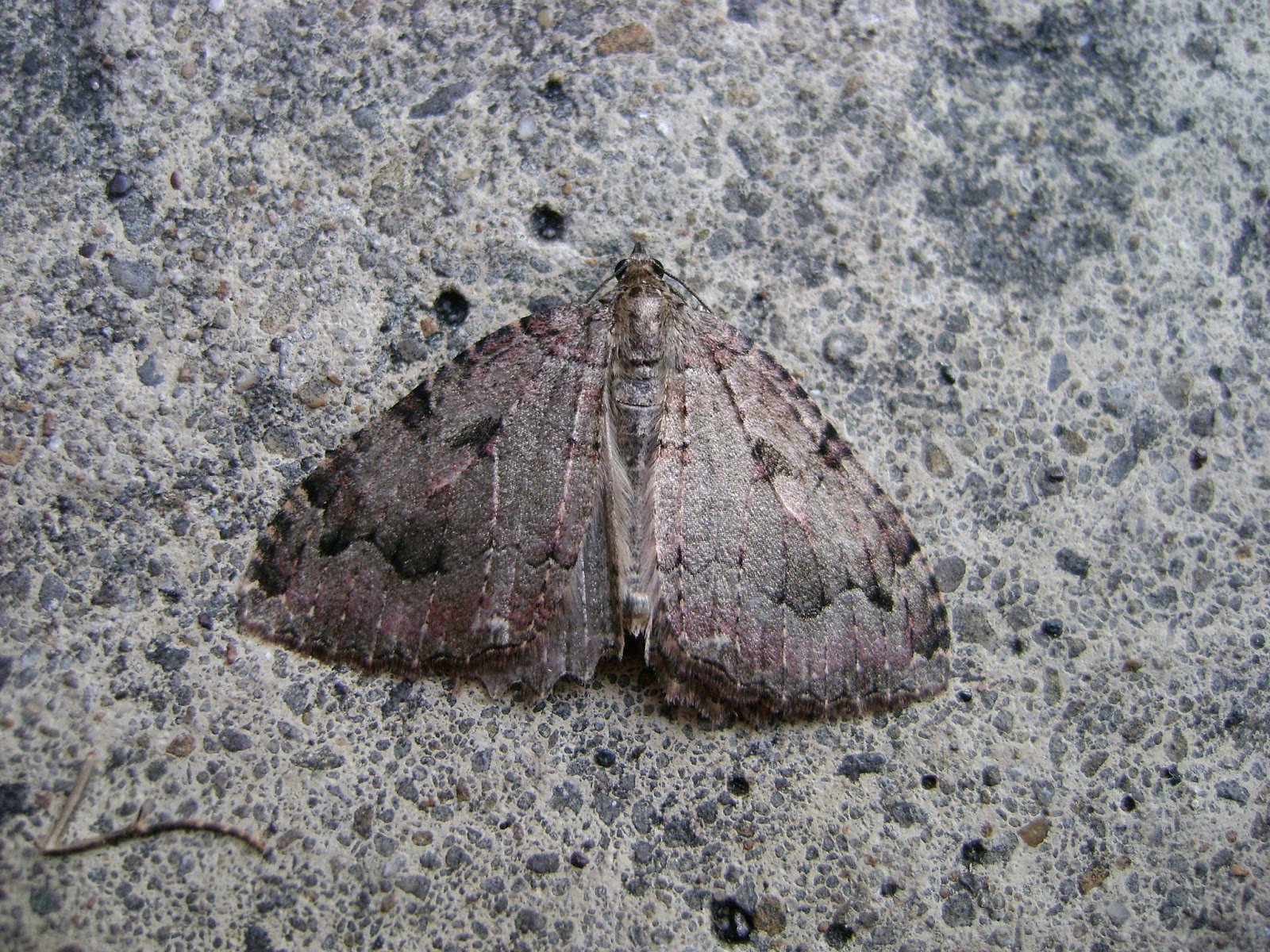 Above: tissue moth, a very scarce and localised Carmarthenshire species. 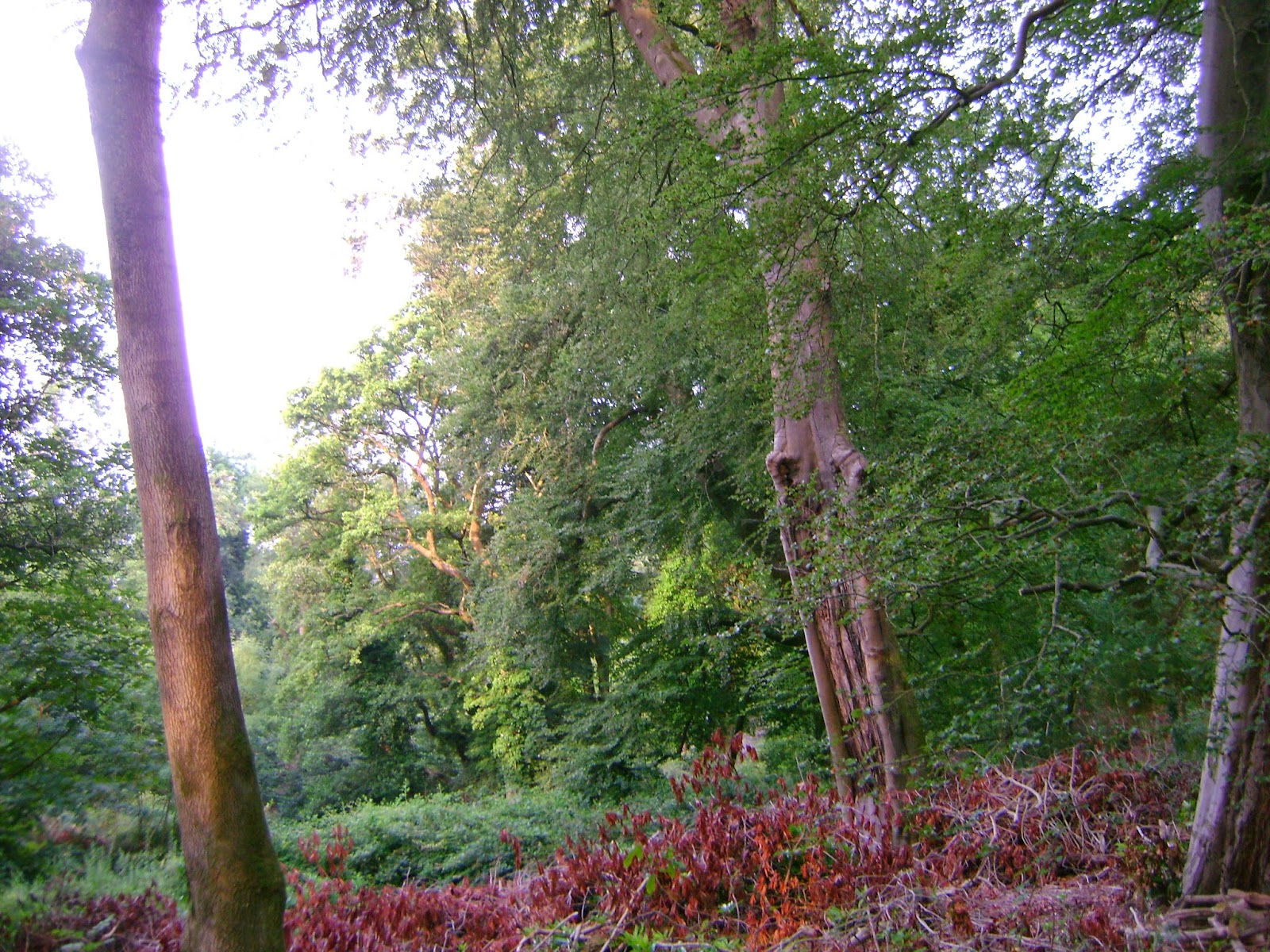 Above: my Stradey Woods trap site on Friday.
Posted by Ian Morgan