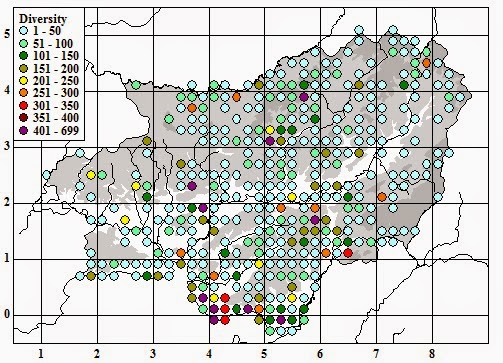 Thankyou to everyone who sent me 2013 records, as requested.  I have just loaded 6500 records from 2013 into the database, plus a good pile from 2012 and before.  There are still a few gaps, which I'll deal with as and when.

Vaughn asked whether there were any under-recorded areas he might target.  Well, it's fair to say that everywhere other than the Llanelli coast and a few observers' homes is under-recorded at the tetrad (2x2 km scale)  At the broader scale, the really poor hectads (10x10km) are SN42 NE of Carmarthen, SN63 around Pumsaint, SN73 around Llandovery, and almost all of Mynydd Du.  Steve Clarke's records from Cwmllwyd and Steve Lucas' from the Brynamman area are really our only insight into this upland block, whilst Dafydd Davies' data from Rhandirmwyn is almost all we know about the NE uplands.

Lots of scope for anyone with Heath traps or a generator!
Posted by sambbryo