It seems that there's plenty of scope for confusion even at this time of year when there are relatively few species on the wing: Chestnut or Dark Chestnut, Winter or Northern Winter Moth, November or Autumnal Moth etc.  Another for me last night involved a Carpet Moth which settled briefly on the wall by the trap; I managed a photo, sadly didn't have a scale with me but it was very pale and quite small, probably not much more than half the normal size of a Spruce Carpet which, after much scrutiny of the photo, I've decided that it must have been.  Moreover, there was one Chestnut in the trap this morning, a very dark one with a lighter orange-brown band along the outer edge of the forewings, the tips of which were sharp-angled rather than rounded, if not exactly hooked.  A Dark Chestnut?  Perhaps there's a case for a 'Chestnut sp.' category for occasions when there is an element of doubt.
Incidentally, there were 20 or so December Moths in and around the trap as well. 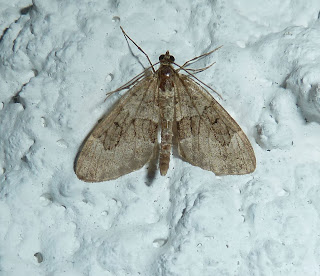 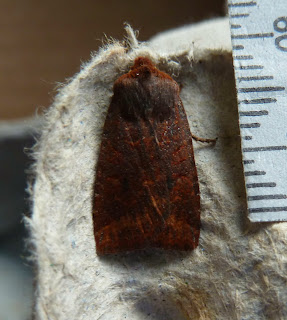