I saw two interesting invertebrate things recently - Thing 1 and Thing 2.
Thing 1 is a very distinctive blue-grey sawfly larva with orange spots, on mint in our garden here at Cnwc y Llwyn, Brechfa.  Google searches suggested it was Tenthredo marginella, but Guy Knight from Liverpool Museums said by email:
"Of the 15 Welsh records I have for this species almost half are from carms, half from glamorgan and one old one from pembs. Nice that you found it in your garden, another one was found on apple mint in a garden in Tyrwaun, Pwll about 10 years ago. The species identified as T. marginella in Britain is actually T. thompsoni, although I'm not sure how much is known about differences between the larvae of this and the 'true' marginella, which occurs further south in Europe".
I'm sure we can all guess who the Tyrwaun, Pwll record was made by! 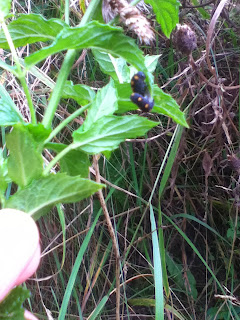 Definitely something to keep an eye out for.
Posted by sambbryo