Haven't trapped for a while in Carms so thought I'd try and make the most of the migrant-fest that seems to be happening! Weather got rather cooler than expected but I was happy with my catch - 22 species including two of the ones I was hoping for. Commonest were common marbled carpet (14) and yellow-line quaker (12) and migrants were represented by a couple of dark sword-grass, rush veneer and a vestal (one of my targets). Other nice moths were merveille du jour x 4 (the other target as I've never caught one myself), brindled green, red-green carpet, feathered thorn, green-brindled crescent, flounced chestnut and red-line quaker. Just a couple of micros - garden rose and rhomboid tortrix. Gratuitous merveille photo: 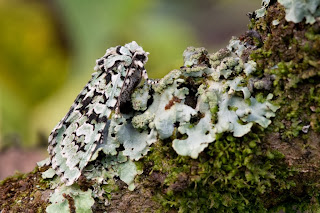 Also, further to the hornet conversation - relatives of mine who live a mile or two outside of Llandeilo (New Inn) told me they had 5 hornets at their window on tuesday night and again on wednesday.
Posted by Vaughn Matthews