I did indeed put the trap somewhere dry last night, which started clear and cool with very little wind but became wet and windy in the early morning.  The MV was on the veranda of the west-facing summerhouse and remained dry, but there was no insect activity at all when I checked at 10pm and no moths entered the trap overnight.  However, there was a single December Moth nearby on the door of the cabin.  It does seem to be an early arrival judging by Jon's 2008 Annual Report which gives the earliest sighting of this species as 3 November (1999). 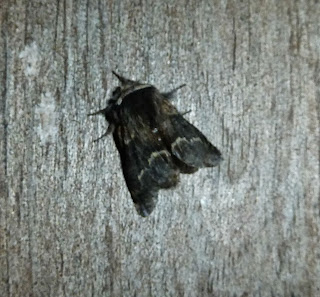