Perhaps a bit of quality but no quantity

Apologies to Ian for plagiarising his title.
Catches were very sparse early in the week (Monday and Tuesday nights), picked up a bit last night but still nothing to shout about in spite of the super-abundance of other insects, mainly flies and beetles.  The most abundant moths were Silver Ys, Common Marbled Carpets, Spruce and Pine Carpets and Rosy Rustics, along with a few Angle Shades, Merveille du Jours and Black Rustics.  Two of particular interest this morning were a brown noctuid with deformed wings and a rather tatty carpet-type geometer.  I'm fairly sure that the former is a Brown-spot Pinion, which I had in 2011 at much the same time of year (I believe that Sally has also had the species in Saron).  As to the geometer, the shape of the central cross-band doesn't seem to match any of the Carpets I normally see here, and I wonder if it might be a Purple Bar, albeit a bit faded.  The Tortricid is puzzling me (don't they always) and I wonder whether anyone can put a name to it. 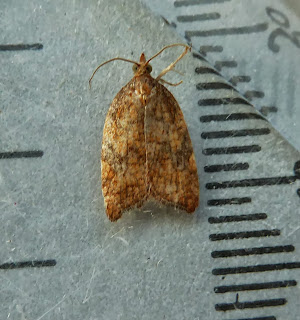 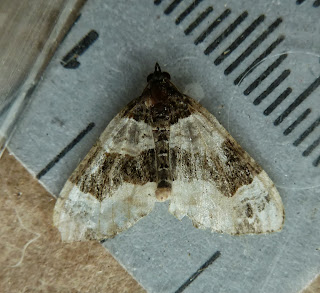 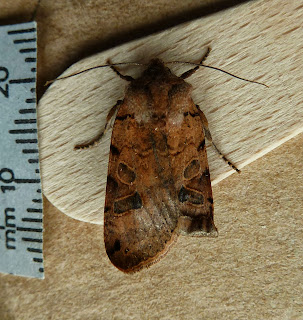