`Target Typha` and other Kidwelly Tales

I had to survey the vegetation around Kymer`s Canal Pond, Kidwelly yesterday afternoon and in the process, noted some potential spots to place my actinic trap last night (6.8.13). Kymer`s Canal, built in the 1700s to carry Gwendraeth coals to the shipping point at Kidwelly Quay is one of the oldest canals in Wales. Photos of the canal and the actual trapping site are shown below.

I was particularly after moths associated with Typha (`bulrush`) and I was not disappointed, with both bulrush and Webbs` wainscots in the trap. These species primarily occur in coastal Carmarthenshire (particularly Webbs`), reflecting the main concentration of their food-plants; it is worth mentioning that Webb`s wainscot often utilises bur-reed (Sparganium) and yellow flag iris, both of which grow `on site`. I used to catch both of these wetland moths (as well as other wainscots) when I lived at Llwynhendy, on the `Llanelli Levels` back in the late 1980s. Also caught at this site were crescents, a double kidney and two wetland pyralids - Donacaula forficella and the rarer Calomotropha paludella (5th vc record); all these are shown in photographs below (except for the crescent). I also include a photo of a blood-vein, of which there were several in the trap. Only the Webb`s wainscot is shown (in profile and in side view, a particularly rufous individual) in this first batch of photos, as a photo of a bulrush wainscot is shown with the text for the second site trapped last night. 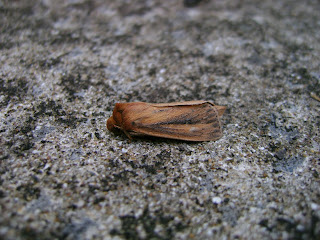 The other Kidwelly site trapped at last night, was a saltmarsh transition pasture just west of Glan yr Afon LNR, which lies alongside the Gwendraeth Estuary. Here, as at the other trap, there were good numbers of moths present, and as at Kymer`s Canal Pond, I had both bulrush and Webb`s wainscots, though only one of the former species. This perhaps makes sense, as there is no bulrush at this Glan yr Afon site (though it doubtless grows close-by). I suspect that Webbs` wainscot is using yellow flag iris, which was plentiful. There were crescents also in this trap, as well as many small wainscots (with much more here than at the Kymer`s Canal Pond trap). The photos below show the habitat present, two photos of the bulrush wainscot (again profile and side) and a photo of a small wainscot.

Hoping to trap nearer to home tonight, as I have a long day in the hills again tomorrow (weather permitting), with the long-shot aspiration of finding and catching a scarce silver-lines to photo!
IMPORTANT NOTICE - most of the Carms regulars will have had an email from me already, but may I remind all that Thurs 8th to Sat 10th August is MothNight 2013, with a theme of tiger moths - see www.mothnight.info