First post for a few weeks but I put the trap out last night for NMN and had a decent haul this morning. About 60 species including a few new ones for me. Highest counts were of six-striped rustic (23), dun-bar (19), Lesser BBYU (18) and July highflyer (16) closely followed by Large YU (15). Highlights for me were gold spangle, magpie (9), silver Y (6), pebble hook-tip, rosy rustic, antler, small rufous and small wainscot. Some nice micros too - bird-cherry ermine, Pyrausta purpuralis, garden rose tortrix and rush veneer. Also, some well-marked (f.decorana) Epinotia nisella. Could someone confirm/deny that the following is a different form of the same species please: 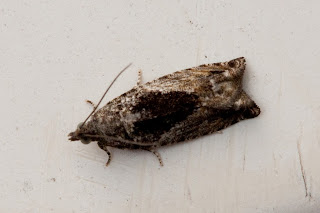 Also a Crambidae which, I'll be honest, I struggle to differentiate in the book... 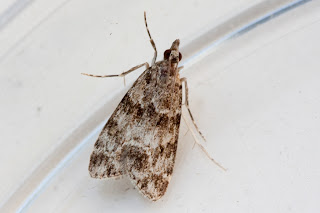 As others are finding, the only tigers were of the ruby variety. Also had 12 chilled-out wasps scattered around the eggboxes...
Sam, I'll email you my species list once I've finished it (hopefully tomorrow).
Cheers,
Vaughn