The Sallows have started, Sam!  Two of the Centre-barred variety in the trap this morning, along with Black Arches, Iron Prominent and Dark Sword-grass (2).  So there are still some nice moths around.  One surprise was a Peach Blossom which was resting on the trap when I inspected it at 10pm, presumably a second generation - they enjoyed the July weather so much that they're back for more.

No trapping was done here over the weekend, family were visiting and enjoying the sight of all the Peacocks, Small Tortoiseshells, Red Admirals, Commas, Small Coppers, Painted Ladys and numerous Silver Ys on the buddleia.  Sadly, no Hummers turned up though.  However, whilst on a Sunday afternoon stroll in the village we were accompanied by several magpie Moths which appeared from the hedges bordering the footpath.  There must have been half a dozen or more.  It's certainly been a good year for them. 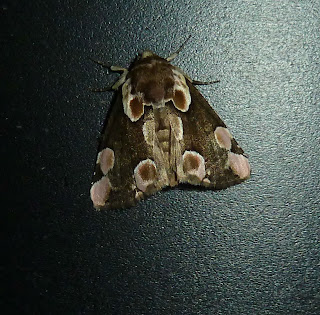 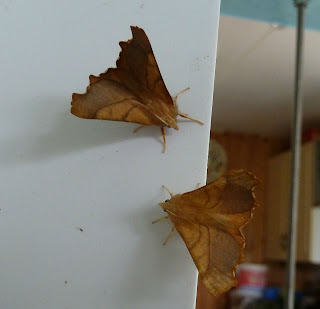 A brace of Dusky Thorns
Posted by Chris Handoll