I managed to put an actinic trap out last night in spite of inclement conditions (the wind/rain wasn't too severe, fortunately), and was rewarded with a Pebble Hook-tip which is a first for me, the only Hook-tip I've had before was of the Oak variety (July 2011).  Nothing much else of note though, no Tiger moths as such, the only representatives of the family were Footmen (Rosy and Dingy).  It seems a bit strange for the Moth Night to feature Tiger Moths at this time of year - isn't it right at the end of the season for most of them?

I also trapped on Monday and Tuesday nights, 21 and 39 species respectively, the most abundant being Dark Arches, Large Yellow Underwing, Dotted Clay and July Highflier.  Plenty of SilverYs around during the day, the only other migrants were on Tuesday night, a Dark Sword-grass and what I took to be a Rush Veneer from its size and shape, although it lacks the distinctive dark markings on the forewings.  If anyone has an alternative identity to suggest from the photo I would be grateful.  Other species of note on Tuesday night were 2 Ghost Moths and 3 Magpie Moths - like Ian, I was pleased to find that the Magpies are still thriving. 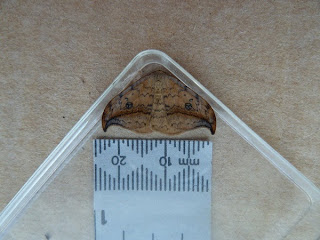 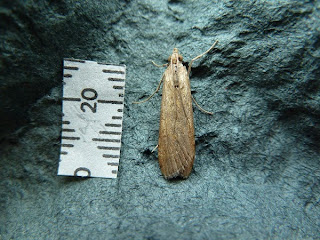