The first Rosy Footman arrived last night, but otherwise it was more of the same, only far fewer moths than on Friday night.  Again, Double Dart was the most numerous (9) closely followed by Double Square Spot.  This species has always caused me some anxiety owing to possible confusion with Triple-spotted Clay.  I raised this with Jon last year, and his advice was as follows:

"TSC is more slender, tends towards plummy rather than brown, has  grubby white hindwings that are very much paler than the forewing  (DSS has browner hindwings not much paler than the forewings). TSC tends to have a pale thoracic crest (the central part of the thorax) and at the base of the forewings has more extensive black markings (where the wings emerge from under the throracic feathering".
I found this helpful, even though it conflicts to some extent with the description of TSC in Waring & Townsend, which describes the hindwing as 'rather dark and brownish with orange-brown fringes'.  The attached photo shows what I regard as a typical DSS, and the hindwings (when I manage to expose them without disturbing the moth) are grey with a distinct brownish fringe.  The twin square spots seem to vary in size and are sometimes completely separate, sometimes joined as in the photo.  Any further advice on how to distinguish these two species 'at a glance' would be welcome.
A week ago I was getting Eudonia delunella, now it's another species which I believe is E. lacustrata.  Sam, perhaps you would kindly advise whether I can be sure of this, I know that these Crambids can be quite difficult, but this one does seem distinctive. 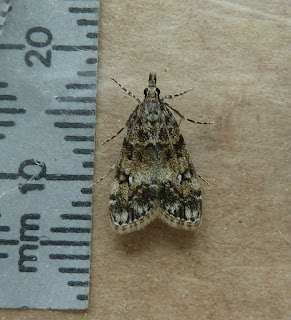 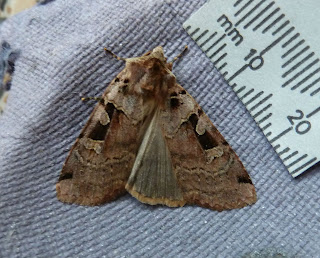