Thank you for the help with identifying Saturday's Dusky Brocade and Mottled Beauty.  I wondered whether the latter might have been f.conversaria, Sam, on account of the contrasting dark and light bands.  However, they were nothing like as vivid as the beauty illustrated on a current Glamorgan blog.  Talking of which, another blog on the same site raises concern about the scarcity of the Cinnabar Moth.  Early last week I was visiting the southern edge of the New Forest, bordering The Solent, where there is an abundance of Ragwort, and I was struck by the complete absence of either the moth itself or its larvae.  I had Cinnabars here in my first year of trapping (2010) but haven't seen any in subsequent years.  Has anyone seen one recently?   Incidentally, on the aforementioned trip we were just about to get into the car and drive home when a large insect landed at my feet, photo attached.  I don't think that I've ever seen one before.  Has it ever been recorded in Carmarthenshire? 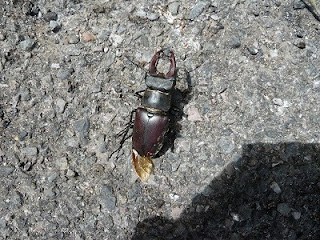