I put the MV trap out without much hope because the conditions (clear and cool) were much the same as Sunday night when I caught next to nothing with my 22W actinic trap.  However, it was quite rewarding, with 20 species turning up.  Multiples of Brimstone, Nut-tree Tussock, Scalloped Hazel, Pebble Prominent, Pale Prominent, White Ermine and Small Phoenix.  New for the year: Peppered Moth, Brown Silver-line, Buff-tip, Spectacle, Barred Umber and Red-green Carpet.  I wasn't sure of the latter at 5a.m. this morning because the combination of markings and wing shape was unfamiliar, very 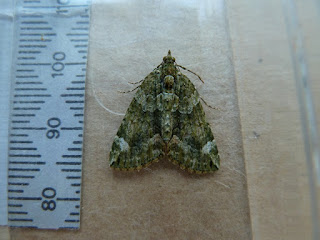 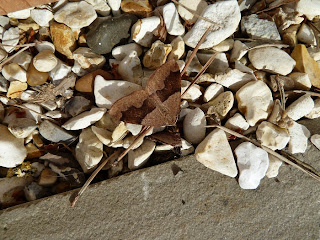 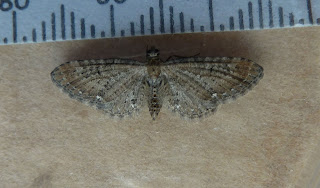 straight-winged, but I don't think that there's any doubt (see photo).  The Pug moth is, I think, a Common Pug in spite of the prominent white spots (none to be seen on the thorax or abdomen).  This moth was freshly emerged, I found it on the garage wall before its wings had developed fully.

Any comments on the identifications would be most welcome.  I'm still fairly low down on the learning curve!
Posted by Chris Handoll