Trapping on a wet night

I put a trap in the greenhouse last night because it was raining. So far I've found 31 moths, some in the trap and some on and in the greenhouse.  I might find some more as the day goes on. Mostly the usual for the time of year: Quaker family, Dotted Border, Early Grey, Shoulder Stripe, Early Thorn. The most interesting find was a female Muslin Moth.  She had evidently emerged from a cocoon attached to a piece of wood which had been in the greenhouse over winter.  I have trapped males of the species in previous years but have not seen a female before. Perhaps if I put her outside tonight she will attract a few suitors. 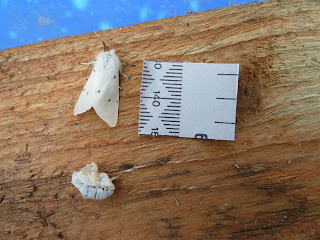