Belated New Year Greetings to all.

I am thinking of splashing out on some Pheromone lures, firstly for Emperor Moth, and also for Clearwings. Looking in the Atlas of Larger moths, it seems that Six-belted Clearwing is the one I’m in with a chance for, but would there be others that are worth trying for. Lunar Hornet Moth perhaps?

Any advice, pros and cons welcome.

The first butterfly of the year... 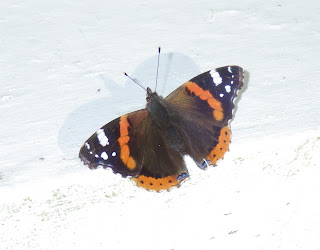 Posted by Ian Morgan No comments:

I did a quick cutting-back session in the garden yesterday (5/12/21) and discovered a unseen bird-sown plant (about 2 ft high) of Leycesteria formosa behind some other shrubs.

It too had mines of Phyllonorycter emberizaepenella on its leaves. If I get the opportunity I may check any other shrubs of Leycesteria that grow locally.

Posted by Ian Morgan No comments:

Yesterday (25/11) I visited some nearby old mixed woodland (Stradey Woods) with the intention of keeping an eye out for lesser spotted woodpeckers as I`d been recently looking at old diaries from the 1970s and early 1980s. I had been surprised at the frequency of my records of this scarce bird, though most of those sightings had been in the late March-early May period when they are more vocal - `drumming` or calling, so a late November visit was unlikely to be successful.

In the event, none were seen (or heard) but, passing some bird-sown shrubs of the alien Leycesteria formosa (`flowering nutmeg`) - a plant that I`ve always disliked as to my eyes it looks artificial (whatever that means!) - I thought that I`d check it for leaf mines. Recently I`d been noting various online records of the micro Phyllonorycter emberizaepenella mining this plant, which was something that I`d known for some time but the frequency of records made me reconsider looking myself. I`d also previously had that micro mining snowberry Symphoricarpus alba. I was more successful with the Phyllonorycter than I was with woodpeckers, quickly finding some mines, as well as some caused by dipterans.

It may actually be easier to find P. emberizaepenella on Leycesteria, giving how fast this plant is spreading, both in urban and rural locations - I`ll keep on looking. Yesterday`s plants were in semi- shade incidentally, in case this influences usage by P. emberizaepenella. 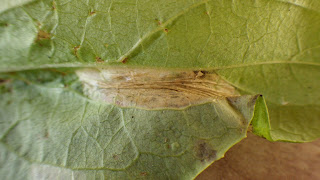 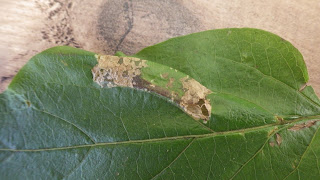 Above: top photo shows the mines from below the leaf, the 2nd photo shows it from above. In P. emberizaepenenella the folding of the mine approximately follows the length of the leaf, whereas in P. trifasciella it causes folding across the width of the leaf.

Above: a dead pupa that was stuck at the edge of a mine. The black dots below are bits of frass stuck to its legs.
Below: the dipteran mine, possibly Chromatomyia aprilinia. 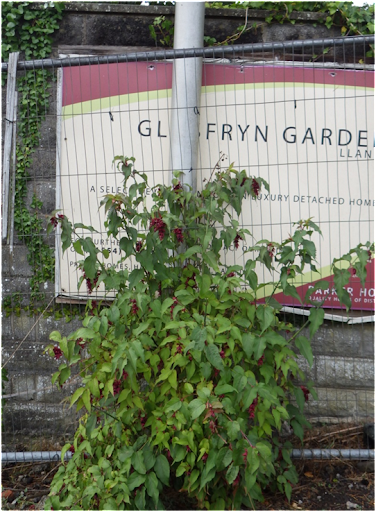 Above: a photo of Leycesteria (from another site).
Posted by Ian Morgan No comments:

Just one in the trap and one on the wall....

As last night (19/11) was likely to be the last with mild conditions before a predicted cold spell, I`d thought it worthwhile to set up the garden trap. In the event there was only a single moth in the trap - a cypress carpet - though there was an out-of-reach November moth agg. high on the adjacent wall. 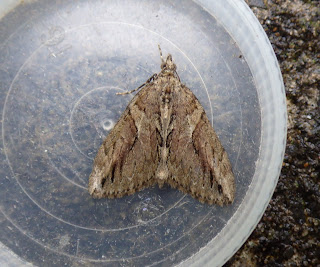 Above: a record shot of last night`s cypress carpet.

The weather forecast looked reasonable for last night (13/11) so, in spite of my sore arm after the covid booster jab, out went the actinic trap. In the event it was worthwhile, with 8 species being not bad for the time of year - these included a couple of December moths, a feathered thorn and the perhaps overlooked Acleris sparsana. There were two migrants (in spite of the N wind) - a silver y and a gem. 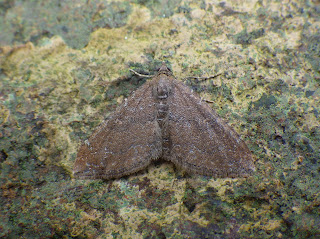 Above: last night`s rather dark gem. 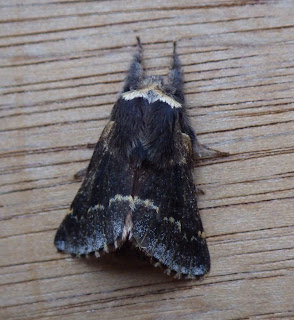 Above: December moth and, below: feathered thorn. 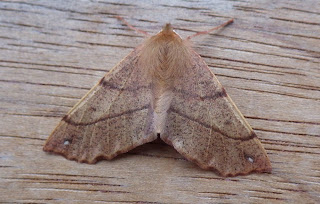 Brown Hairstreaks need your help. They are in serious trouble between Amroth and Broad Oak, having seemingly disappeared from every known site since 2009. Ironically, we alerted Welsh government to this likelihood in 2008 but received no response. As ever, there is likely to be a complexity of contributing factors, but the greater % of hedges being mechanically flailed annually during the last decade has undoubted contributed - 80% to 90% of eggs are removed from young blackthorn shoots in each pass of the flail! We are however embarking on a concerted effort to search both new and old sites between Carmarthen and Llandeilo during November & December. 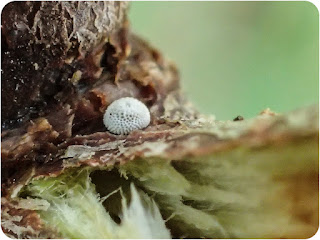 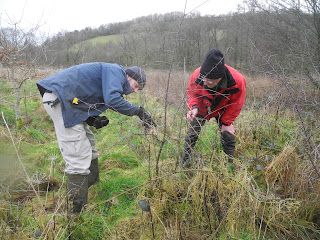 As you "mothers" obviously get about a bit, do let us know if you spot any unflailed blackthorn either in hedges or scrub in the Tywi valley. You can e-mail us via "Contacts" on South Wales branch web page:

If you'd like to search yourself, the eggs stay on unflailed blackthorn all winter, hatching in April and are mostly commonly located between main stem and side shoot. A hand lens is useful.

Posted by Richard Smith No comments: